What were the Americans thinking at the Thessaloniki International Fair in 2018? 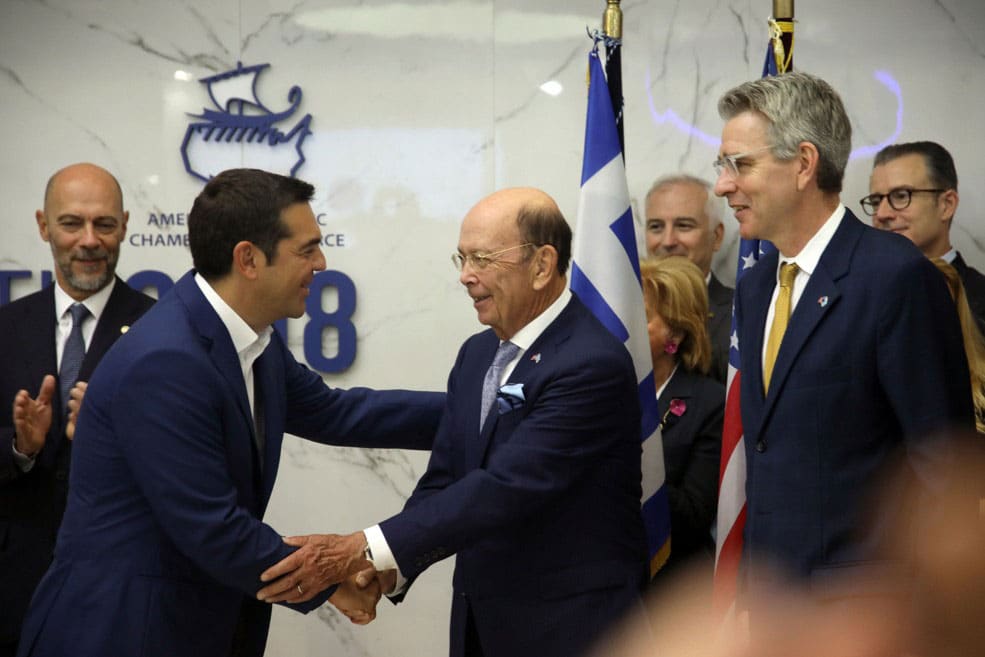 As the 84th Thessaloniki International Fair (TIF) is inaugurated 7 September, high-level officials, pundits and regional business leaders will be focusing on economic policy pronouncements made by Greek Prime Minister Kyriakos Mitsotakis, this year opening the TIF for his first time as Prime Minister.

This year’s “honoured country” at the TIF is India, not really expected to be a major crowd or investor draw as was seen last year when the United States was given that honour.

Therein lies the interesting turn of events.  Many will recall the massive effort the US made at last year’s TIF, which even included an important ship visit and a speech by visiting US Secretary of Commerce Wilbur Ross, who again briefly stopped by Athens on 5 September of this year, and is known as a strong supporter of Greece’s efforts to attract foreign investment through ongoing business-friendly reforms.

Informed observers of Greece-US relations will recall that the Americans were bumped up to being the honoured guests in 2018, which was originally supposed to be given to India. However, the switch came after a specific request was made by US Ambassador to Greece, Geoffrey Pyatt, sometime in the autumn of 2017.

In view of what has transpired over the past year with the collapse of Greek voter enthusiasm for the leftist SYRIZA government that Washington had appeared to support strongly back in 2018, the question is being asked whether Ambassador Pyatt’s initiative to bring the US into the spotlight in 2018 actually served American economic interests, since leaving things alone, by simply keeping them in the unaltered TIF chronological order, would have resulted in the US being the “honoured country” in a year that the Harvard-educated “Greece means business” Mitsotakis presides over the TIF and all major investment decisions, instead of SYRIZA’s now largely irrelevant socialist/statist economic team that we saw last year.

In other words, by moving the US “honoured country” slot to 2018, almost every dollar spent and hour invested in planning events and photo ops with officials of the SYRIZA government realistically has to be defined as a non-performing investment, and that’s not including the lingering ill will that Washington’s massive investment in the government of former Prime Minister Alexis Tsipras, which was in power in 2018, has created with the incoming New Democracy team.

It will be years before documents are declassified that will reveal the connection between Athens’ offer to give the US the 2018 slot at the TIF and the visit to Washington by Tsipras in October 2017.  It is quite possible this honor was used as a sweetener to lock down Tsipras’ White House meeting with President Donald J. Trump in the tense period before a decision came through.

It is, however, also possible that this was just a result of pressure from Pyatt to bring the event forward so that it would unfold before his Greece assignment was over. Pyatt arrived in Greece from Ukraine in the late summer of 2016 and he would have been expecting to depart in the summer of 2019 on a normal three-year cycle, not knowing at the time he would be given an extension of his assignment in Greece at least through the end of 2019.  There is certainly nothing wrong with legacy projects, as long as they produce appropriate results for the resources expended.

Amidst the opening fanfare in Thessaloniki this year, the question certainly needs to be asked, what if anything the US actually gained by moving the gala US event ahead to 2018?  The American companies already in Greece remain strongly committed to increasing trade and investment as Greece emerges from its crisis, but they currently do not and did not need fancy trade shows in 2018 to understand how to work in the complicated Greek environment.

We certainly haven’t seen Washington changing its approach to Northern Greece in any significant way, leaving the US Consulate General in Thessaloniki shamefully understaffed with one diplomat both at the helm and the boiler room. Nor have we seen a surge in new US investor interest in Northern Greece resulting from the massive effort the US Embassy and its strong business partners invested in 2018.

Ultimately, it’s a question of how quickly the new Mitsotakis government can make real improvements to Greece’s business climate through its planned reforms, and very little about trade fair diplomacy.