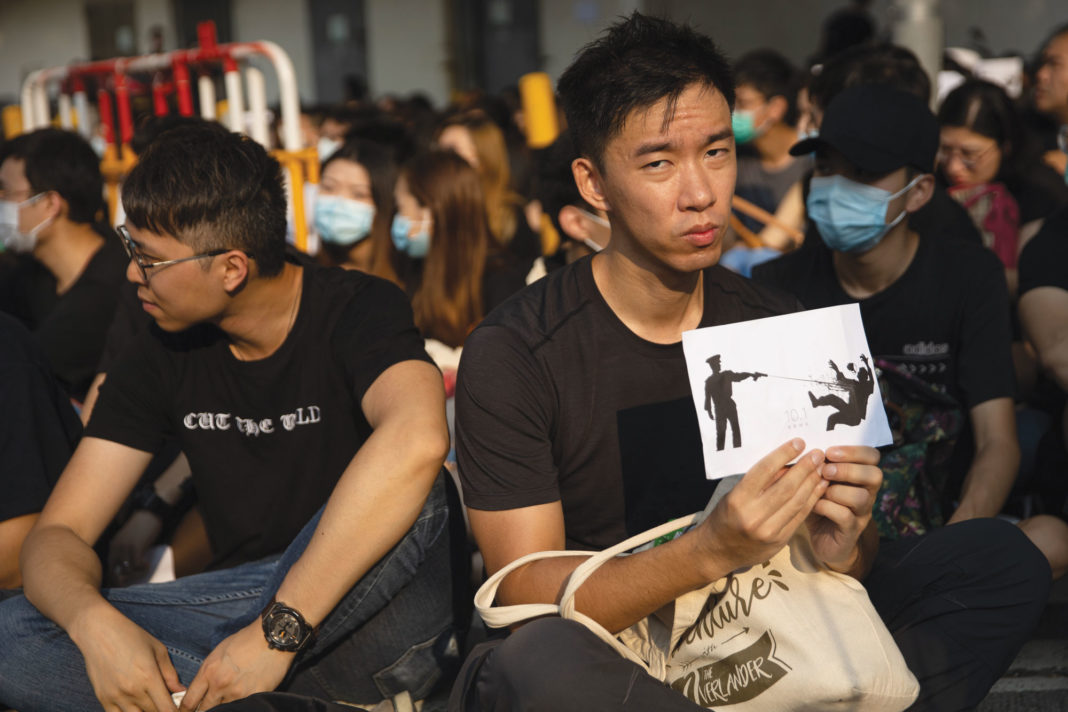 Whoever thinks that last week’s shooting of a Hong Kong demonstrator while Chinese President Xi Jinping addressed – in a Mao Zedong-style suit, no less – a parade of 100,000 adoring people in Beijing, was not premeditated and planed is either naïve or knows nothing about the true face of Communism.

Observing the various videos released by demonstrators, it seems that the pointblank shooting was not indented to kill, but was instead timed to be a clear message to Hong Kong and the world.

The Chinese Communist Party has de facto abolished the semi-autonomous status of Hong Kong and has now placed it under effective control of the Chinese army with more than 10,000 special operation troops stationed there. Hong Kong’s local administration and the police are now following orders from high-ranking Communist Party officials in Beijing.

In this context, if China, for reasons of domestic prestige decides to officialize intervention, it will unilaterally end the status of Hong Kong as a Special Administrative Region of the People’s Republic of China provided by the joint declaration that was signed by then-British Prime Minister Margaret Thatcher and Chinese Premier Zhao Ziyang in 1984, under which Hong Kong would return to China in 1997 and to be governed under the “one country, two systems” doctrine for 50 years.

The 70th anniversary celebrations of the Communists’ take-over of China were undermined by the Hong Kong demonstrations. The protestors have attracted worldwide public attention and, most importantly, exposed a sense of creeping panic from Communist officials who worry that their regime may soon end, just as it did for nearly all of the formerly ruling Communist parties around the world.

The Chinese experiment with Communism, which has gone against its Marxist-Leninist principles to survive and separates the Communist socio-political system into a political dictatorship and a Wild West-type market economy, has failed.

In China, the market economy is private but under the total control of the Chinese Communist Party. It has granted ownership to the country’s private citizens from big corporate groups and let new ones develop, but only under the control of Communist Party apparatchiks. They work for their own interests and profits, yet under the political direction of the Party, which has its share in the profits. As to foreign investors who are flourishing in China the majority stock is in the hands of Chinese, all related to the Communist party.

Labour laws in China don’t come close to meeting US or EU standards and protections, including many more cases that look like forced labour and abuses that the West has struggled to fight against in the last century.

This is an element to consider whenever the real trade war between the United States and China escalates. In order to contain China, and under the lack of labour rules excuse, Washington may well ban all Chinese products and introduce a generalised total embargo on China that Europe will be forced to follow in order to be “politically correct”. Consequently, Russia will also have good reasons to follow suit.

Under this scenario, the Western business community will sense the likely outcome and American and European companies operating in China will have started moving out before any official embargo is in place. That will, however, only be an afterthought.

The potential collapse of Communist dictatorship in China will, however, signify a real catastrophe for the Chinese economy as it will be followed by a chaotic period before a new order can be restored. Huge organisations like China and the Soviet Union before it – even corporations like Lehman Brothers – do not adapt, they simply disappear.

The Hong Kong protestors openly ridiculed and mocked the seven-day, 70th anniversary celebrations that began in Beijing, on 1 October. The Communist Party designed the commemorations to be a major spectacle that glorified the establishment of Communist rule and the ironically named “People’s Republic of China”.

These celebrations were in the planning for months and were intentionally designed to be the most grandiose celebration in the history of the Chinese Communist Party. But put within the context of the demonstrations in Hong Kong, the celebrations have revealed that both the Party and its leader, Xi, have suffered a major political blow both  domestically and internationally when it comes to projecting China’s prestige to the world.

China has a long road ahead before it ever arrives at any semblance of “normalisation”. No one doubts the simple fact that Communist rule will eventually end in China one day, just as it did in the Soviet Union and all over Moscow’s own Communist satellites in Eastern Europe more than a generation ago. One only has to remember that just a year before the fall of the Berlin Wall, hardly anyone standing at Checkpoint Charlie could ever have thought that the two Germanys would ever unite.

Beijing’s latest decision to direct its handpicked overseer of Hong Kong, Carrie Lam, to use executive emergency powers to ban face masks and relax the police’s guidelines for the use of force echoes the fatal flaw of Ukraine’s now-deposed former President Viktor Yanukovych. The latter’s own provision gave both the police and his security services the license to make arbitrary arrests, censor publications, and search private property. This engaged the protestors that had gathered in central Kiev  for months and helped mobilise thousands more citizens who, up to that point, had remained out of the fray. This ushered in the most violent and oppressive phase of the Euromaidan Revolution that ended with Yanukovych’s ouster.

One can’t help but wonder if Beijng is making the same fatal mistake in Hong Kong. And if the Communist Party is opting to go down that road, are they ready to employ the same lethal tactics that they used in Tiananmen Square in 1989 to quell the current uprising?

In the event that Xi and his hardliners in the politburo do opt to suppress the protests in Hong Kong with the full force of the People’s Liberation Army,  China will face a number of escalating problems, including sporadic internal reactions and growing criticism from the West. This will decelerate the pace of growth when it comes to its international political and financial influence.

In this context, to divert people’s attention away from China’s mounting domestic deadlocks, aside from the still unfolding situation in Hong Kong, Beijing may attempt to resolve the Taiwan “issue” or move to expand its military presence on the strategic islands in the South China Sea.

This, will be only the beginning.