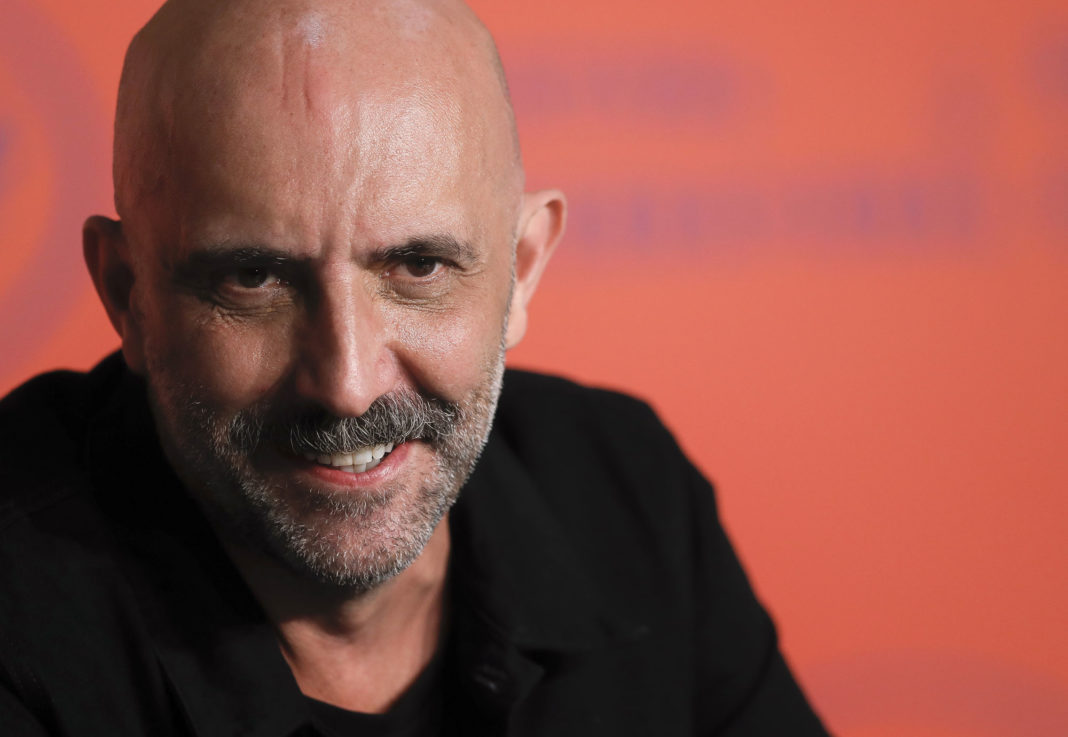 For nearly 20 years, French director Gaspar Noé’s patented visuals of hyper-graphic violence and relentlessly innovative cinematography had brought with them several critical awards and festival acclaim for each of his works.

Since the release of Irréversible 17 years ago, including last year’s Climax and 2009’s Enter the Void, Noé’ has used his films as a medium to explore highly visual, defamiliarised expressions of people searching for the meaning of life

New Europe’s Federico Grandesso sat down for an interview at Venice with the Argentine-born French director, who presented a standard chronological version of Irréversible.

New Europe (NE): How did you come up with the title?

Gaspar Noé (GN): Back then, I was actually thinking of giving the film a singular name- to make it sound more French, like “Dominique” or something. And then I was told that in Japan, they have this pronunciation problem with the “L” and even an English title would make it difficult for them. Also, there was the film that made Monica famous in Japan was Malena (2000) by Giuseppe Tornatore. I was tempted to name it “Alex” (after Bellucci’s character in the film) and they thought the Japanese would love a simple title like that. The idea was nice, but then I said no that I wasn’t into it. The film isn’t specifically about Monica or any certain character. What makes the film more dramatic is that you don’t identify with Monica, but the theme about the future. As you see at the start of the film, you learn very early on that Monica’s character is pregnant. Everyone thinks that everything is going to be good, that they’re going to have a baby, and all these are projections into the future, but as the story progresses, you see she was mad at the guy and his bad behaviour – snorting coke and kissing other girls at a party. In the first 20 minutes of the film, you start noticing that things are going to go wrong. Not only that, you also understand that there’s a character who is heroic because this guy saves the other guy, but over the course of the whole film he‘s also shown to have madly fallen for her, but he’s holding himself back.

NE: How did you design the antagonist’s story in the film?

GN: You saw from the movie that the real aggressor is standing there enjoying all the hardship of the situation, which in the end makes the film become much darker. In all of the movies I do, the antagonist’s always gets punished by the guy who seeks revenge. But in this case, in real life, most of the crimes go unpunished. In this guy’s case, his crime is just like all other unresolved crimes, he becomes a collective figure.

NE: Were the controversial themes in the film intentional?

GN: I knew I wanted it to be (told) backwards, but I wrote the whole script and it was only three or four pages long and every scene was like something like 10-15 lines, sometimes shorter. Even the rape scene was made shorter and I didn’t want to write that much because I knew that if I put too much detail there then the producers and the financial backers would freak out. In the initial script, I made it between 12 to 14 pages, and then I would read them in the right order and reverse the order. I made sure that the end result could be perfectly understood in both ways. That’s why it was possible to do the re-cut because it was shot chronologically. It was conceived chronologically, but also with the clear intention of making play out backwards. Once again, this version is not the final cut or the director’s cut of Irréversible, but rather the same as the one that I made some years ago. So, this one doesn’t replace any other one. I think this is an interesting sub-psychological game because you don’t have the same attachment at all to the situations or to the characters. It’s like when you read about a crime, you know that the person killed someone, but then you try to understand the reasons. That was the previous version. When you follow every scene in the regular sense of the order of time, things become emotionally much apparent.

NE: How do you feel about being in Venice with Monica Bellucci?

GN: I’m happy to see her again here. It’s actually interesting. The first person that I showed the movie to was Monica. I said to her, “Hey, I have a surprise for you. I want to show you something.” She came and she couldn’t believe it. Vincent Cassel still hasn’t seen it, (Albert) Dupont also hasn’t seen it. I had met (Alberto) Barbera in Cannes this year and I wanted to show him as well and he was very happy about it. Now I see the legacy of their performances. I don’t know if anybody in France or the US would do a movie like this nowadays or even at the time it was made. And if I have to be sincere, Monica and her character is the ultimate image of female perfection in a French movie. She’s luminous. She’s like beautiful prose. She’s the sensation of a girl that has got some guts.

NE: What do you think about the negative reactions to the film from the critics?

GN: In every music performance, there is always one singer who is loved by the fan, and another who the critics adore. The average person usually pays to see a movie and they know why they’re going to watch it. Film critics are sometimes forced to see a movie that they know they will dislike. And when you go to Cannes, it’s like the World Cup of cinema where people fight for their flags. You have a little clique and you’ll fight for your friends. I remember when I went to Cannes, I was whistling, even when a friend’s film was shown, I would just whistle – not that the movie was bad, it was good – but sorry, I’ve did it anyway. People react in so many different ways. I’ve also sometimes had weird reactions from people like when they walk out of the cinema because of the violence in the film or because of their objection to seeing a woman be abused after this #MeToo Movement. But what happened to Monica’s character represents all of our fears about being raped because when I was a boy I had the same fear too and I bet many out there share a similar sentiment. Now people are no longer afraid to speak up about the sexual abuse they experienced. It is good that this kind of thing coming out now, but in all honesty men are not going to change. Its been that way since the Stone Age.

NE: What do you think about the current cinema landscape in relation to this film?

GN: No one in America could do this kind of movie, not only for financial reasons, but also because of the actors. Isabelle Adjani, for example, is fantastic in many movies, but almost no one in the US would treat her right. There’s an incredible level of confidence in an actress under exposure, like you see in this movie, but it is rare nowadays. No actor could play it safe if they took Vincent Cassel’s role in the film, with all the crazy violence and homophobic slurs without being condemned or being smeared as a bad person. Everybody now is asking for some sort of moral answer. It’s in the hands of the director to declare “oh, I’m leftist,” or “I’m conservative,” “I’m a Republican” (blah-blah-blah). Movies are so stupidly clear nowadays.