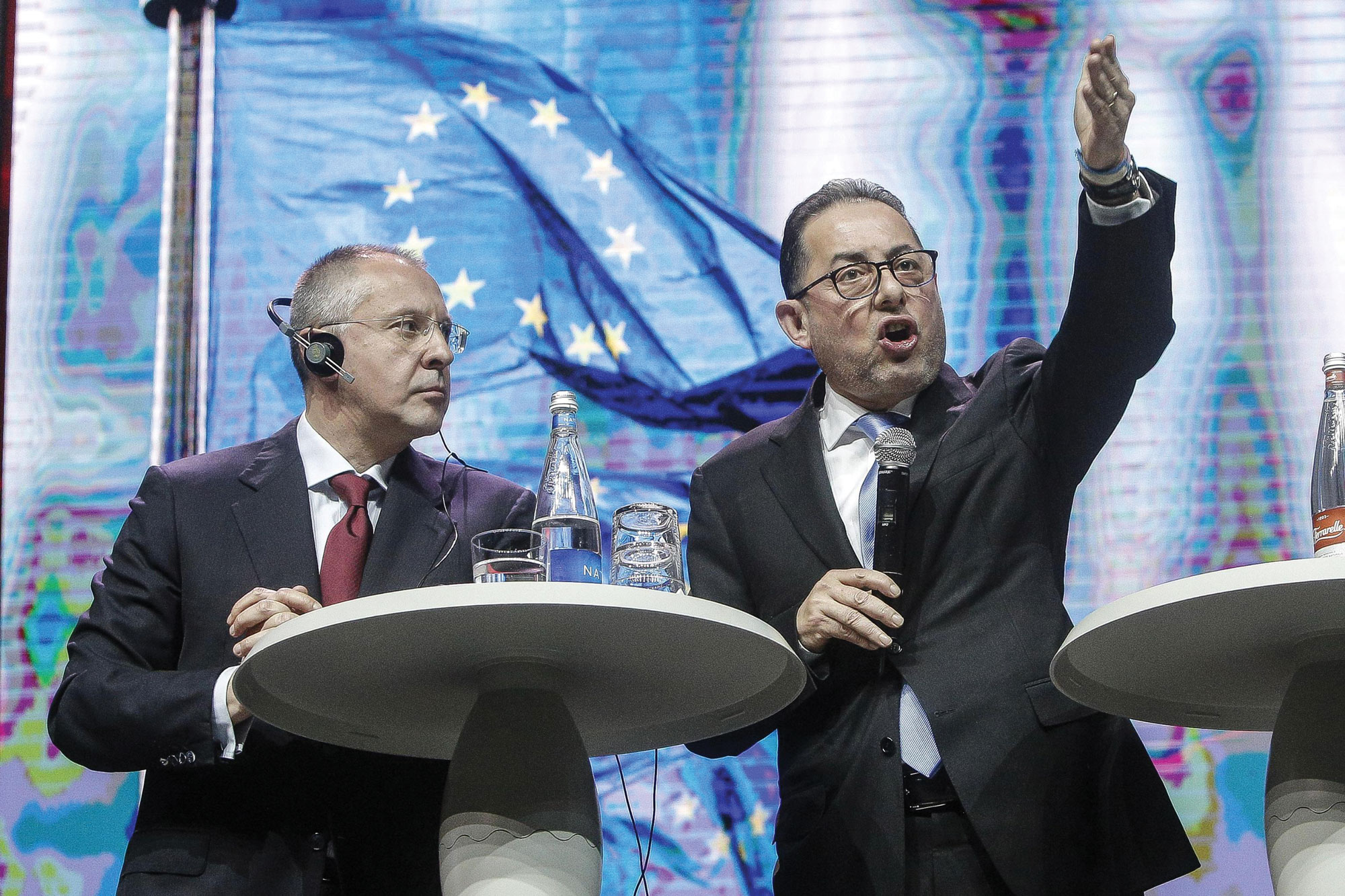 New Europe interviews the President of the Group of the Progressive Alliance of Socialists and Democrats in the European Parliament (S&D), Gianni Pittella

As the EU celebrated the sixtieth anniversary since the signing of the Treaty of Rome, New Europe sat down with President of the Group of the Progressive Alliance of Socialists and Democrats in the European Parliament (S&D), Gianni Pittella, to discuss ‘Brussels’, the governance of the EU institutions, and the future of the European Union.

Sitting in his fifth floor office in the European Parliament, Pittella told New Europe Editor, Alexandros Koronakis, that the three European institutions being presided by one political party goes too far.

“It is wrong. Not for the S&D [Group], but for Europe. It’s wrong to give three presidencies to the same family.” Pittella looked at it mathematically; the EPP Group has a less than 30-seat difference with the S&D Group in a 751-seat Parliament. “For this difference,” Pittella criticized, “the EPP gets three presidencies and we have only Federica Mogherini … This is not democratic.” However the Italian made it clear this was not about who has control, “We are not for power,” he explained, “we are looking for a right balance of the powers.”

With the EU counting sixty years since the Treaty of Rome, Pittella shared some of his thoughts on the functioning of the institutions, their successes and failures.

The most problematic, Pittella noted, is the division of powers. “Power is focused; concentrated in the European Council and among the member states who take part in the European Council – there are many divisions. This is the reason of the blocking of the activities. The European Commission does its job, the Parliament does its job, but when this job arrives on the table of the 28 heads of government this job is blocked. This is the main problem of the European Union. On the migration crisis, the European Commission made a proposal. We, as Parliament, share this proposal, and then after one year this proposal is blocked in the Council and one of the main reasons of the anger and fear of the citizens is the management of the refugee and migration crisis.”

The S&D President has said about Europe’s future that he only sees one option: to work together as Europeans and do “much more together, because together we are stronger.”

During the interview, Pittella dwelled deeper: “The first thing is to put on the table what we will do – not to develop the speed, but the direction.” The priorities, “for us socialists,” are: “to change the austerity policy and to open the new phase concentrated on the job creation and on the sustainable development. We will, in this file, we should set up a finance minister and foresee the Eurobond; fiscal common policies.”

“The Second priority for us is the social agenda –  increasing  funding for the youth guarantee, foreseeing a child guarantee and approving the revision of the posted workers directive, approving a directive on equal job/equal payment and other measures for social protection.”

“The Third priority is fiscal justice. We have to support the proposals made by [EU Economic and Financial Affairs Commissioner] Pierre Moscovici, to avoid that the big multinationals pay less taxes than the workers of Brussels.”

“Finally, our Fourth priority is the efficient management of the migration and refugee flows and a common defense and security and foreign policy.”

“These are our key priorities. In addition, I would say I’m very concerned on the state of democracy in some countries of Europe and that we have to act to avoid that some governments violate the principles and basis of the rule of law.”

Noting the electoral result in the Netherlands, which saw a sharp decline in the seats won by the socialist party, Pittella said that there needs to be a clearer distinction between the socialist, and EPP family. In this way, the voters who resort to anti-European forces would become reduced in numbers. “The performance of Martin Schulz in Germany is evidence of the rightness of my political evaluation,” Pittella highlighted.

Talking about the strategy of the S&D, Pittella explained that the big political families are not always unified in their views on specific issues. “In the committees we continue to work. We try to discuss beforehand with the Greens and the GUE, but we also hold discussions with the EPP and ALDE and we try to divide [them].” Pittella noted the approval of the report of Maria João Rodrigues on the social pillar as an example of this.

“This is our aim on civil liberties issues, on social issues, and on the changing of austerity policy. In reality, being pro-European is not enough to be in alliance. I know very well that many colleagues from the EPP are pro-European, but this is not enough to justify an alliance because it is necessary to also have a convergence of views on economic and social issues. So, good; we have the same pro-European ambition and we will fight against the anti-European forces. Okay – we cooperate strongly on that. But I am not [German Finance Minister Wolfgang] Schaüble. I don’t have the same economic line as Schaüble. I don’t want to destroy Greece, for example. I don’t want to keep the Fiscal Compact.”

Asked whether he rejects the notion that the S&D is not pro-European because they are not in the new coalition forged on initiative of the EPP, Pittella was adamant: “[The S&D is] more pro-European, or at least equally so. My colleague [EPP Group Chairman Manfred] Weber makes a mistake when he qualifies as pro-European a Group such as the ECR.”

Pittella recently threw himself in the race for the European Parliament Presidency, finishing behind the EPP’s candidate, Antonio Tajani. As a result of the last-minute coalition between the EPP, ALDE, and ECR, Pittella found himself missing critical votes that would have put him in pole position.

But Pittella had proposed an alliance with ALDE. Asked if relations with the Liberal group have been restored, the Socialist leader explained that there is nothing to dwell on.

“I have always spoken with Guy Verhofstadt, including during the electoral campaign. I proposed an alliance with the Liberal group because there are many issues on which we have the same line, the same sensibility, and the same feeling; take civil rights for example. We have fought always together. But I take note that each one chooses their own path, as individuals we have the freedom to do that. The relationship on the personal, human level is excellent. When we can cooperate on a single dossier, we cooperate.”

Pittella recently found himself in Greece, where he was awarded honorary citizenship of Athens. On the occasion, he said that, “Greece has paid an enormous price for unjustified austerity.” Asked about his visit to Greece and his thoughts on the conclusion of the second review, Pittella was hopeful:

“First allow me to express my pride for the honorary citizenship, because Athens is not just a symbol of a city, it’s the symbol of democracy and culture and I am very, really honored to be a citizen of Athens.”

“Secondly, I’m fighting to close the Second Review. To allow Greece to restore collective bargaining and to launch a new phase in which it is possible to give more attention to social protection. If Greece is only implementing budgets cuts and more taxes, Greece will lose hope for a future.”

“It is a pity because Greece as a country is the origin of our democratic Europe.”