Georgian Ambassador to the United States, former Minister of European and Euro-Atlantic Integration of Georgia 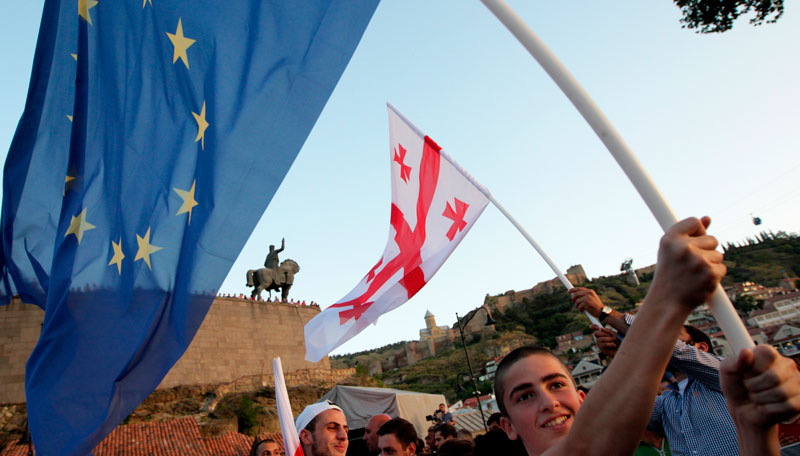 Georgia | Tbilisi: During 2014 Georgia reached a milestone in the path for its European trajectory; 2015 will be a year of further anchorage.

The fulfilment of our European and Euro-Atlantic aspirations remains a long-term strategic priority of Georgia`s foreign policy. This trajectory enjoys overwhelming public opinion support – sustainably nearly 80% – and enjoys a near consensus amongst most political parties. Consequently, the Government of Georgia is committed to a sustainable, irreversible and continuous process of reforms, thereby advancing and deepening both its political association and gradual economic integration with the EU. Our aim is to develop democracy, achieve prosperity and return to the family of European nations to which we feel we belong.

2014 was a historic year both for Georgia and the EU. Georgia signed the Association Agreement (AA) and a Deep and Comprehensive Free Trade Agreement (DC FTA) with the European Union on June 27, 2014, as a result of intensive and comprehensive democratic and economic reforms. These choices are now the foundation of a status quo that is irreversible and our commitment to Europe is also made apparent by our active engagement in the EUFOR RCA operation. We not only hope to be engaged but to actively contribute to the security, democracy and economic prosperity of Europe.

The Association Agreement concluded will reinvigorate the pace of reforms profoundly impacting upon the domestic political and social landscape. This Agreement has been transformative not only due to its provisions, which lay the blueprints of Europeanization, but also for the sense of irreversibility it instils. Chiefly, Europeanization is treated as a synonym to substantive democratization.  After the first democratic transfer of power in the 2012 legislative elections, the successful conclusion of the 2013 presidential elections, local self-government elections were held in June, 2014. This completes a circle of electoral encounters that – international monitors concur – were unblemished. The Government ensured a level playing field in every respect and Georgia, for the first time, complies with the EU standards of democratic governance. In fact, I think, Georgia sets the standard in the region when it comes to political pluralism, freedom of media and speech, human rights, and a business-friendly climate.

A sequence of Constitutional amendments guarantees that checks and balances between the legislative and executive branches will ensure progress in the process of consolidation of democracy. After significant efforts, a free and independent judicial system has been advancing and Courts are regaining trust and respect of the population. Furthermore, the DCFTA with the EU will significantly enhance economic relations, attract foreign investments, stimulate economic growth and support Georgia`s integration in the European economic area.

The Government had approved 2020 Strategy for Socio-Economic Development, which aims to ensure a long-term, sustainable and inclusive economic growth of the country. This in turn is complemented by the EU`s financial assistance to Georgia through various programmes and projects enhancing Georgia’s administrative capacities and at the same time enabling the empowerment of non-governmental and more broadly 3rd sector actors. We expect that these intertwined processes will contribute both to the project of “Europeanization” as such, as well as provide a platform for the development of civil service and civic society.

Retaining civic engagement in the process of Europeanization is of outmost significance. Despite overwhelming support for the EU integration process, the Georgian government pays particular attention to awareness rising campaigns in all segments of the Georgian society. Georgia was the first country in the region to adopt “EU Integration Communication and Information Strategy” developed through consultation with Civil Society.

During 2015, we expect a major leap in people’s mobility, which for public opinion is one of the most important milestones on the road to Europe. The prospect of free people-to-people contact, trade, cultural exchange and academic cooperation is the most tangible benefit of European integration for citizens of Georgia.

After the Eastern Partnership Summit in Vilnius, Georgia demonstrated significant progress in the implementation of the Visa Liberalization Action Plan (VLAP). We are looking forward to the Eastern Partnership Riga Summit and expect concrete results according to the EU`s merit based approach. As a political system, as a public administration, as a people, in both institutional and substantive terms, Georgia and Georgians merit European Perspective – an “acceptance” that speaks to citizens’ sense of reality. Following concrete progress in our Association Agenda Action plan, the effective implementation of the VLAP second phase, we are looking forward to the Commission’s positive recommendation on the visa waiver for short-term travel by the citizens of Georgia. We also hope that such a positive recommendation can also catalyse progress in ongoing negotiations, motivating our citizens living in the occupied regions.

In many respects, Europeanization is not merely a course we have taken in view of its final destination but also because for the transformative process this path entails.