Legitimising fraud is easy and simple 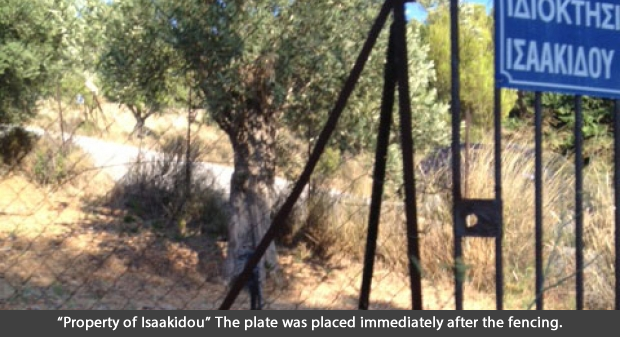 Today, we will continue to enrich your vocabulary with Greek words that have no direct translation in other languages that corresponds to the exact meaning of a specific concept.

“Katapatissis” is another wonderful Greek word which has no single-word translation in other European languages. “Katapatissis” (trespass of property, according to the dictionary) is the action of taking possession of immovable property, which belongs to somebody else. The subject of “katapatissis,” the trespassed property) is called “katapatimeno.”

The “property” can be land, buildings and even territories expropriated according to Article 17 of the Greek Constitution for the construction of infrastructure of public interest.

The owner of the trespassed property can be anybody.

A fellow citizen who is not aware that the property in question is his (this happens pretty often as the Greek cadastre is only in the papers), somebody living in another place, or abroad and he has forgotten his property, or he remembers but is confident that piece of land is still there. Of course, the land is there for sure, what it is not sure is who the owner will be after a few years.

Victims of ‘katapatissis” include the State, local and regional administration, the church, monasteries, various charitable establishments and individuals.

What is important is, that if one is able to prove twenty years of uninterrupted “katapatisis,” the trespasser becomes the legitimate owner of the land, by law.

I remember the case of a Greek-American who retired after forty years and came back to Greece, planning to build a nice house in a piece of land he thought he had in a luxury suburb. When he visited the land after some forty years, he found himself in front of a six-story apartment building, and the only thing he could do was to pray in the small tiny church, next to the entrance of the garage.

Katapatissis may happen by individuals of all classes and levels but also by large companies managed by respected foreign investors.

What is amazing, is the way trespassed property is legitimised in the interim period, before the end of the 20 years provided by the law. A kind of legitimate  hostile take-over.

For this business, two are required to do the job, and one victim. Let’s say Tizio, Caio (two wheelers dealers who live in the area) and Sempronio (the victim) who lives abroad, let’s say in Albuquerque, New Mexico and is the owner of a nice piece of land, near Athens.

Tizio identifies the land he wants to get possession of, then one summer Sunday afternoon, he employs two Albanian, preferable illegal, workers to build a wire fence around the property of Sempronio.

During the operation Tizio stays at a distance where he can supervise the works but can have an easy escape if the police stop and asks for the fencing permit. If this happens (rarely), the Albanians will be arrested with no consequences for Tizio and the story will be over.

The choice of illegal workers is not coincidental as they will go immediately through the deportation process and nobody will care to look for their employer, Tizio.

However, since the police will not appear and the Albanians will finish fencing, Tizio will go and the inspect the works, will pay them and will affix a metallic plate with the inscription “Property of Mr. Tizio.” Once the “property will be defined, after a few weeks Tizio will move into “his” property a small (or big) “wheel house.”

Then it is the time of Caio, the friend of Tizio, to step into the stage. Caio, who has nothing to do with the property, takes Tizio to the Court, accusing him for trespassing “his” property.

At the trial, Caio presents his case not in a very convincing manner, i.e., he claims that he was told by my uncle Kosta who passed away five years ago that this piece of land belonged to his grandfather and in that discussion was present also his grandmother who died at 95 five years before.

On his side, Tizio present two “witnesses” who under oath testify that the specific lot belonged to the family of Tizio for generations and was used to keep the animals of the family for decades. Under such strong testimonies (against the weak and vague testimonies of Caio), the judge rules that land unquestionably belongs to Tizio, by Court decision and the case is over.

From here on things are routine. Tizio buys a prefabricated Church to get electricity, water and telephone and history repeats itself. The Church process is needed as the house standing on wheels is considered “movable” and thus, while no building permit is necessary, it is not entitled to electricity or water.