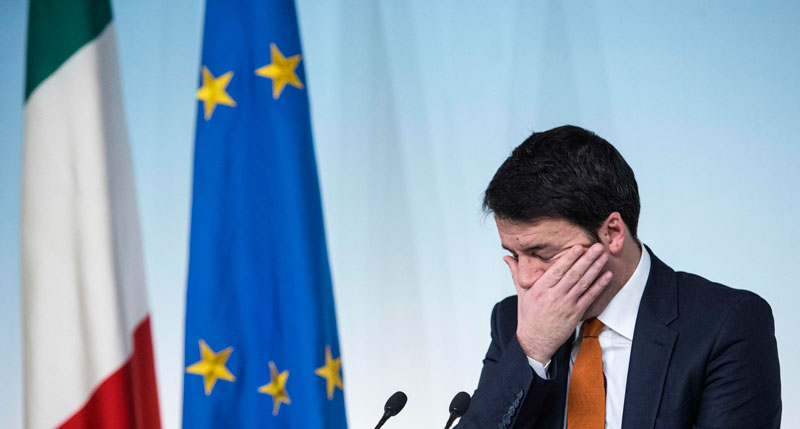 Belgium | Brussels: The 2014 will be remembered by the majority of the Italian workforce as a “turning point” year during which the approval of the long-awaited jobs act was welcomed by the European Union and the entrepreneurs’ association as the first truly visible reform by the Renzi Government. And even if this came at a high price in terms of internal opposition with many Democratic Party (PD) parliamentarians ready to quit the party.

Matteo Renzi, despite the harsh conformation with a conservative trade unionists, was able to prove to Europe and to the international markets that he is able to impose concrete and structural reforms.

Now the first semester of 2015 will be a crucial test of Renzi’s ability to address the resistance. The first crucial appointment not to fail will be the election of the new head of state. Renzi will have to find a candidate appreciated by a large majority of the parliament, but more important a president who will not go beyond his constitutional mandate.

President Giorgio Napolitano was, up until now, a pivot of the last three “non-elected” governments.

The Italian PM is now pinning his hopes on a more discrete action from the Quirinale. Romano Prodi is certainly a candidate, but he will never be accepted by Berlusconi and Grillo. This means the former socialist PM Giuliano Amato could be a balanced choice even if the leader of Forza Italia could also vote for another impartial Democratic Party candidate.

Another important player in this game will be Beppe Grillo, but it will be very unlikely to see a “coalition” of Silvio Berlusconi and Grillo together. This means Renzi will have to chose, like in the case of the “Nazareno pact” with Forza Italia. At present, the former Cavaliere seems to be the more reliable of the two.

The second big challenge will be the EU budget exam in March. Renzi is obliged to continue with the reforms especially those concerning the electoral, public administration and the constitution.

Here Berlusconi is fundamental and many in his party have yet to be convinced by Renzi’s proposals, especially about the electoral reform, which would be a “perfect weapon” for Renzi in case of elections.

Meanwhile, Berlusconi has to stay in the game and wait until February when his political agility will be complete. His plan will be to regain the votes lost by a successful Northern Leaguer and a very weak Grillo, who may have lost the recent regional elections but still managed to gain 20% of the votes.

So, if the EU will turn its back on Renzi in March, he will face a big challenge. According to recent polls, he has already lost 5% in the EU elections while the two centre-left and centre-right coalitions are now trailing behind by only 5%.

If the minority of the PD split and Grillo does not stop losing votes and parliamentarians (he lost more than 25 among senators and deputies), both Berlusconi and Matteo  Salvini, the new victorious leader of the Northern League, could win the important regional elections appointment, in Veneto, Campania etc.

If the centre-left finds a leader, the centre-right coalition will face an unprecedented battle between Salvini, the Northern League and Berlusconi. According to LA 7 TV, a recent electoral poll shows they are both at around 14-15%.

Salvini, a young MEP and dynamic leader, was able to attract the electorate with a mix of anti-Europeanism, anti-immigration and some interesting proposals like the one for a new flat tax.

Putting aside some anti-south attitudes, he is now able to “conquer” the south of Italy with a new symbol – a real revolution in a party that less than two years ago was at the 4%.

The great dilemma now is whether Berlusconi will decide to pass off his leadership, not only to a leader of another concurrent party, but also to a more politically aggressive Salvini who could also “attract” voters away from his own electorate. If Berlusconi and Renzi are facing both internal and external challenges, Grillo has also been losing sleep since the result of the regional elections in Emilia and Calabria. The regional council of these regions stepped down accused for corruption and it was apparently an easy battle for a party that was always pushing zero tolerance on corruption.

If the centre-left finds a leader, the centre-right coalition will face an unprecedented battle between Salvini, the Northern League and Berlusconi

The bitter reality was that the PD won with a high score in Calabria and in Emilia. Though this is a historically “red region”, the Northern League was able to mobilise the protest vote and become the second party in one of the richest Italian regions. “I’m a little bit tired,” Grillo said after his defeat and he surprisingly launched a five-member directory board to better coordinate the political line of his movement. He understood it was time to change and to put forward some very prominent and charismatic names to try to keep the movement together of find a strong political identity.

2015 will be the year in which Renzi will have to prove in a concrete way that he was not only able to convince Europe about the importance of growth versus austerity, but that Italy will finally be able to rapidly pursue structural reforms, reduce its deficit and become a reliable partner.

In this political panorama, the Italian prime minister will have to fight for reforms more against his “internal” and conservative opponents (the minority in the PD, the trade unions and even the magistrates) than the opposition and be ready to show his political legitimacy and sit at the winners table. And if in the future there will be a split in the PD, with a possible pivot like the trade unionist leader Maurizio Landini, this time the Italian electorate will probably not understand the choice of a political group based on a “democratic” conservation of the status-quo and protection of privileges and it will give a definitive “carte blance” mandate to Renzi. This is probably what the “Florentine” leader is hoping for.