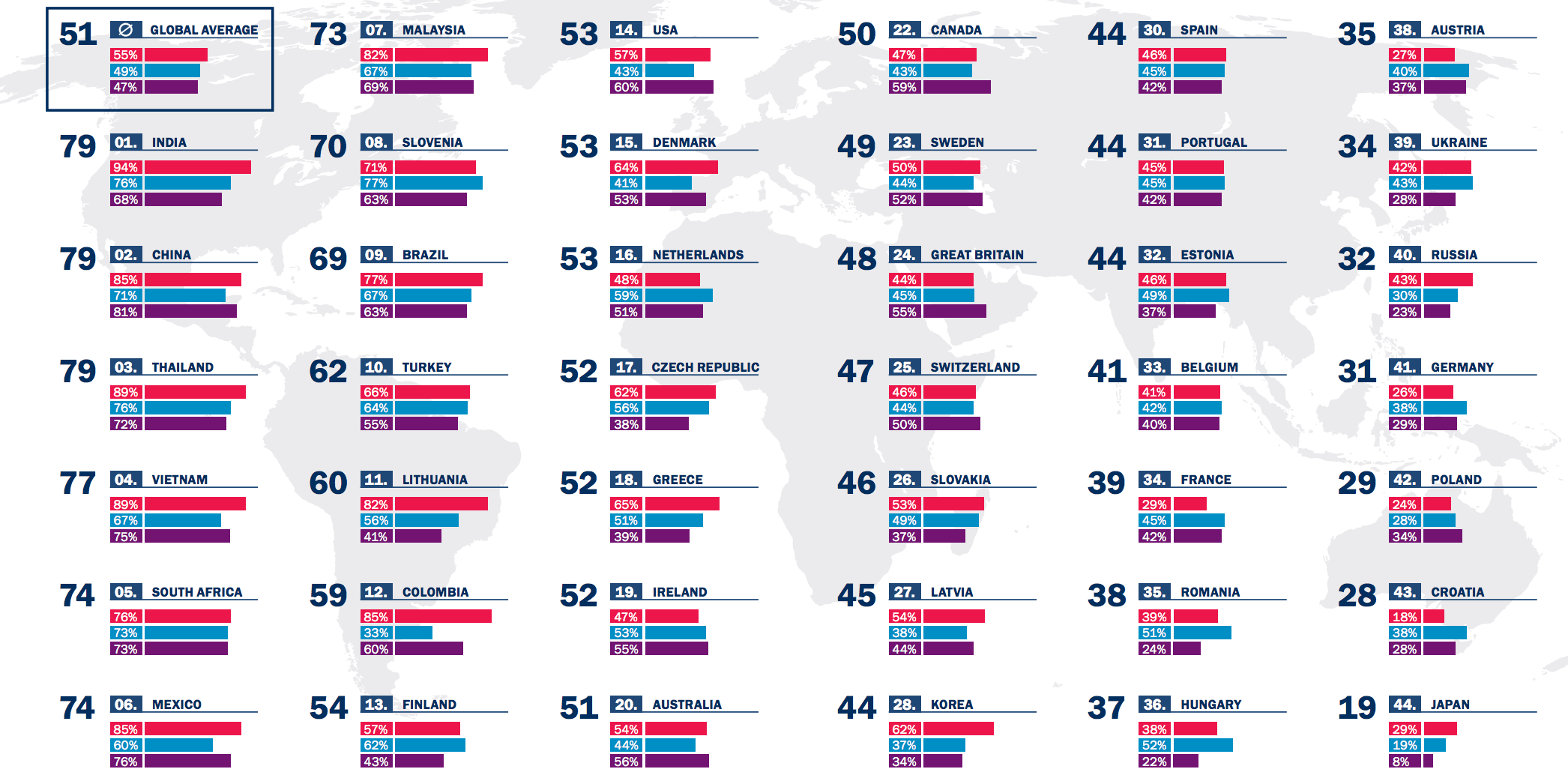 Entrepreneurs are frequently thought of as assets to the country’s development. If successful, their innovations spur economic growth and bring opportunities to communities. But what fuels a persons’ intentions to start a business? What are the personal drivers and what are the obstacles to become an entrepreneur?

The newly published 2015 Amway Global Entrepreneurship Report (AGER), an annual survey that takes the publics’ opinion on the state of self-employment across the world answers these questions. This year’s report explores entrepreneurial spirit. Entrepreneurial spirit is about people and the societies in which they live in – it is about their fears, beliefs, values and cultures.

The AGER is a global study published by Amway in partnership with the Chair of Strategy and Organization at the Technische Universität München in Germany. The fieldwork was conducted by the Gesellschaft für Konsumforschung in Nuremberg. This year’s report spans 44 countries, with 49,775 respondents aged 14-99.

“Today more than ever people are turning to entrepreneurship to achieve the lifestyles they desire. And as social and economic climates change, so do the reasons people venture out on their own,” Amway’s president Doug DeVos and chairman Steve Van Andel write. “Entrepreneurship is a way for people to realize a better life for themselves and their families,” DeVos and Van Andel Added. “We believe entrepreneurs bring a lot value to the people around them and our hope is this study helps advance that understanding.”

Entrepreneurs are a valuable source of innovation in our society. Understanding their value, governments promote programmes to cultivate, motivate and remunerate entrepreneurs. But what does the community think about entrepreneurs? And how entrepreneurship-friendly the general public thinks their society is?

This year’s finding shows that entrepreneurs are generally characterised as first and foremost avid learners and those open for change who strive for success and reputation. When answering whether their society is entrepreneurship-friendly, only half of the general public said yes. However, when observing the answers of the general public, it is important to take into consideration culture. In countries where culture avoid uncertainty, respondents perceived their society much less friendly to entrepreneurship.

Although, the general public feels positively about entrepreneurs (75% on average), an average of 43 percent of the respondents are willing to become one. However, the entrepreneurial potential varies between demographic groups. For instance, the findings show that females are less willing to start a business. Added to that, the motivation to become self-employed decreases as age increases. However, for those who are willing to jump into the pool of self-employment, what are the drivers behind this risk-taking?

Independence as the main driver for entrepreneurship

The newly introduced Amway Entrepreneurial Spirit Index (AEPI) measures those factors that influence a person’s’ intention to start a business. In order to strengthen entrepreneurial intentions, companies and governments must understand personal drivers to start a business. The more favourable these factors are for the behaviour, the more persistent people will be to succeed. Therefore, the index explored these motivations, taking into consideration three motivational factors: desirability, stability against social pressure, and feasibility (how people feel prepare to start a business).

Amway President, Doug Devos, participated in a live Facebook Q&A earlier today to discuss the AGER. Asked how entrepreneurship is different today than it was 10 years ago, Devos answered:

The entrepreneurial spirit and characteristics are similar over time…what changes is the environment that showcases those characteristics. It gets back to an environment created in an atmosphere of positivity and looking forward to the future, paired with the barriers in place.

The difference between now and then are there are more opportunities but still barriers. Our goal in doing the AGER study is to study and think about what we need to do to support entrepreneurs. Our hope is that this discussion will spark review and discussion.

Globally on average, nearly half of the respondents feel they have the desire to start a business (55%), that it is feasible (47%) and that they would not let their social environment dissuade them from their desires (49%). The country’s with the highest AESI score are a better environment for people to imagine starting a business.

The index concluded that young people have the strongest desire to becoming self-employed. As age increases, so does the motivation for entrepreneurship, yet middle-age female and male feel most confidence in having the necessary resources and skills. However, on average, more male feel confident to start a new business in comparison to female. Also, female would let others close to them dissuade them from taking an entrepreneurial path. When asked about fears and obstacles, most respondents, despite of age and gender, agreed that fear of failure was the strongest factor (although older respondents were slightly less fearful). In addition, the threat of an economic crisis was a second largest factor.

When asked about how they view entrepreneurs, the EU respondents especially though that characteristics such as liking to learn new things and enjoying life are most highest. Taking it further, speaking about the reasons why they want to be entrepreneurs, there was a general consensus among the EU public, with most striving for independence and becoming their “own boss.” Second factor is self-fulfilment with entrepreneurship providing an opportunity to realize own ideas. But the reason why most were not willing to take the risk was the fear of failing. Europe, however, is not the strongest continent with this fear (69%), with Asia having the most respondents who fear to fail (82%).

Perhaps the most disappointing the results for the EU, with people’s’ desirability, stability and feasibility to open up their own business ranking lowest in the world. The European average of AESI score is at 45 percent, while North American (52), Asia (64), and Latin America (67) show a higher score than the international average (51).

Especially remarkable for the future of entrepreneurship in Europe is the fact that Generation Y, defined as respondents aged under 35 years, in the EU are more inclined (52%) than those respondents over 50 years (37%).

Entrepreneurship-friendliness stagnates, fear of failure is a continuing obstacle

Furthermore, echoing 2013 results, the fear of failure remained a significant hurdle in the European Union (69%) and on worldwide average (70%). Especially, the financial crisis seems to have an effect until today. Respondents in the EU see the financial aspects of entrepreneurship as a remaining hurdle to venturing out. “Financial burdens” (41%) and “threat of the economic crisis” (29%) are the factors feeding this fearfulness most. Especially Generation Y seem to be under a great deal of psychological pressure. They are more fearful (72%) than respondents over 50 years (66%).

Affirming 2014 results, 72 percent of respondents in the EU held positive attitudes toward entrepreneurship, while only eight percent were already self-employed. With 79 percent, EU-respondents under 35 years were the most optimistic.

Asked about the two most compelling factors for starting a business, EU-respondents were convinced of “independence from an employer, being my own boss” (48%) and “self-fulfillment, possibility to realize own ideas” (43%), confirming 2014 results. Among all age groups, respondents under 35 years held the strongest belief in “independence” at 55 percent. It’s noteworthy that respondents from countries with a higher GDP per capita also rate self-fulfillment as a stronger reason to start a business. Furthermore, all factors to starting a business are rated less appealing in countries which are characterized by a culture of uncertainty avoidance.

Amway partner and Chair for Strategy and Organization at Technische Universität München (TUM) Prof. Dr. Isabell M. Welpe stresses, “The positive attitude for entrepreneurship remains high globally, especially among younger generations. Yet a mere eight percent of EU respondents are self-employed. This research sheds new light on how to close this gap of unused entrepreneurial potential.”

A report that furthers our understanding of entrepreneurship

A unique index introduced only this year helps for concerned actors understand why demographic groups can (or cannot) envision starting a business. This report with its findings can help in the future for businesses and governments to introduce targeted entrepreneurship programmes, which would help those who want to start a new business to follow their motivations and overcome their obstacles and fears. Addressing these issues and improve each region’s’ entrepreneurship environment might give potential entrepreneurs a push that they need to get started on their own business. When they finally take the risk, it will pay off, for them and for their communities.

Amway conducted the 2015 AGER in partnership with the Chair of Strategy and Organization at the Technische Universität München in Germany. Fieldwork was completed by the Gesellschaft für Konsumforschung in Nuremberg from May to August 2015. This year’s report spans 44 countries, with 49,775 respondents aged 14-99.
The AGER’s key findings are shared with the scientific community, including the 44 AGER academic advisors around the world, European and national think tanks, NGOs, academic and public institutions as well as policy advisors.