Chairman of Soros Fund Management and of the Open Society Institute. 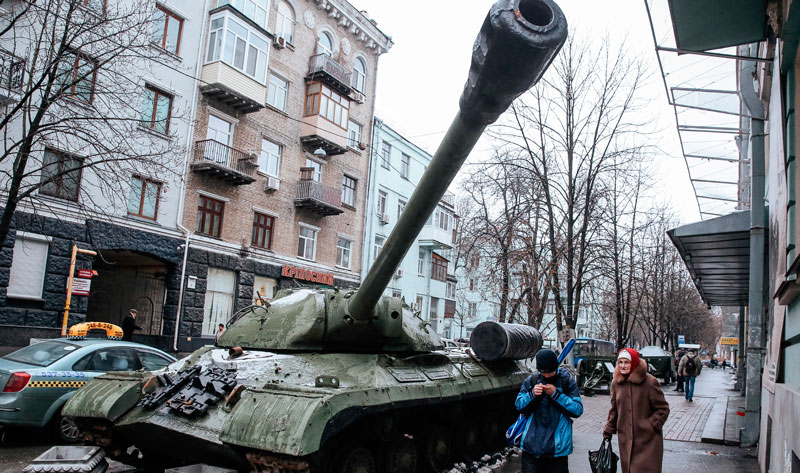 USA | NEW YORK: By invading Ukraine in 2014, President Vladimir Putin’s Russia has posed a fundamental challenge to the values and principles on which the European Union was founded, and to the rules-based system that has kept the peace in Europe since 1945. Neither Europe’s leaders nor its citizens are fully aware of the scope of this challenge, much less how to deal with it.

Putin’s regime is based on rule by force, manifested in repression at home and aggression abroad. But it has been able to gain a tactical advantage, at least in the short term, over the EU and the United States, which are determined to avoid direct military confrontation.

Violating its treaty obligations, Russia annexed Crimea and established separatist enclaves in eastern Ukraine’s Donbas region. When it appeared last summer that the Ukrainian government might win the war in Donbas, Putin ordered an invasion by regular Russian armed forces. Preparations for a second wave of military action began in November, when Putin provided separatists with a new influx of armored columns and personnel.

The West, sadly, has provided embattled Ukraine with only a façade of support. Equally disturbing has been the continuing reluctance of international leaders to provide new financial commitments to Ukraine, despite growing pressure on its foreign-currency reserves and the specter of a full-blown financial meltdown. As a result, the mere threat of military action may be sufficient to bring about Ukraine’s economic collapse.

Putin seems to be holding out the prospect of a grand bargain, with Russia helping in the fight against the Islamic State – for example, by not supplying S300 missiles to Syria (thus preserving US air domination) – in exchange for the US giving Russia control over its so-called “near abroad.” Should US President Barack Obama accept such a deal, the entire structure of international relations would be dangerously altered in favor of the use of force. That would be a tragic mistake, with far-reaching geopolitical consequences.

The collapse of Ukraine would be a tremendous loss for NATO and indirectly for the EU and the US. A victorious Russia would pose a potent threat to the Baltic states, with their large ethnic Russian populations. Instead of supporting Ukraine, NATO would have to defend itself on its own soil, exposing both the EU and the US to the danger they have been so eager to avoid: direct military confrontation with Russia.

The threat to the EU’s political cohesion is even greater than the military risk. The euro crisis has transformed an ever-closer union of equal sovereign states, willingly sacrificing a share of their independence for the common good, into an association of creditor and debtor countries, with the debtors struggling to meet the creditors’ terms.

This new EU is neither equal nor voluntary. In fact, for many young people in the debtor countries, the EU seems like a foreign oppressor. And about 30% of the recently elected European Parliament ran on anti-European platforms.

It is this internal weakness that has allowed Putin’s Russia – which, on its own, is far from attractive – to emerge as a potent rival to the EU. Hungarian Prime Minister Viktor Orbán has gone so far as to cite Putin as his role model – and he is no anomaly. Neither Europe’s leaders nor its citizens seem to recognize that Russia’s attack on Ukraine is indirectly an assault on the EU and its principles of governance. It should be clear that it is inappropriate for a country, or association of countries, at war to pursue fiscal austerity, as the EU continues to do. All available resources should be put to work in the war effort, even if that requires running up budget deficits.

Europe is fortunate that German Chancellor Angela Merkel has behaved as a true European with regard to the threat posed by Russia. The foremost advocate of sanctions, she has been more willing to defy German public opinion and business interests on the issue than on any other. But Germany has also been the main advocate of fiscal austerity, and Merkel needs to understand the contradiction between these positions.

Sanctions against Russia are necessary, but they are not without repercussions. European economies, including Germany, are suffering, as the sanctions’ depressive impact aggravates the recessionary and deflationary forces that are already at work. By contrast, helping Ukraine to defend itself against Russian aggression would have a stimulative effect on Ukraine and Europe. The EU’s members are at war – and they need to start acting like it. That means modifying their commitment to fiscal austerity and recognizing that they are better off helping Ukraine to defend itself than hoping that they will not have to defend the EU themselves.

Ukraine needs an immediate cash injection of, say, $20 billion, with a promise of more when needed, in order to stave off a financial collapse. The International Monetary Fund could provide these funds, as it did previously, with the EU promising to match the IMF’s contribution. Actual expenditures would remain under the IMF’s control and subject to the implementation of far-reaching structural reforms. In Ukraine, there is one more factor working in the EU’s favor: the country’s new leadership is determined to correct previous governments’ corruption, mismanagement, and abuses. Indeed, it has already created a detailed strategy to cut household gas consumption by more than half, with the goal of dispersing the corrupt gas monopoly of Naftogaz and ending Ukraine’s energy dependence on Russia. The “new Ukraine” is resolutely pro-European, and ready to defend Europe by defending itself. But its enemies – not only Putin’s Russia, but also its own bureaucracy and financial oligarchy – are formidable, and it cannot defeat them alone.  Supporting the new Ukraine in 2015 and beyond is the most cost-effective investment the EU could make. It could even help the EU recapture the spirit of unity and shared prosperity that led to its creation. In short, by saving Ukraine, the EU could also save itself.