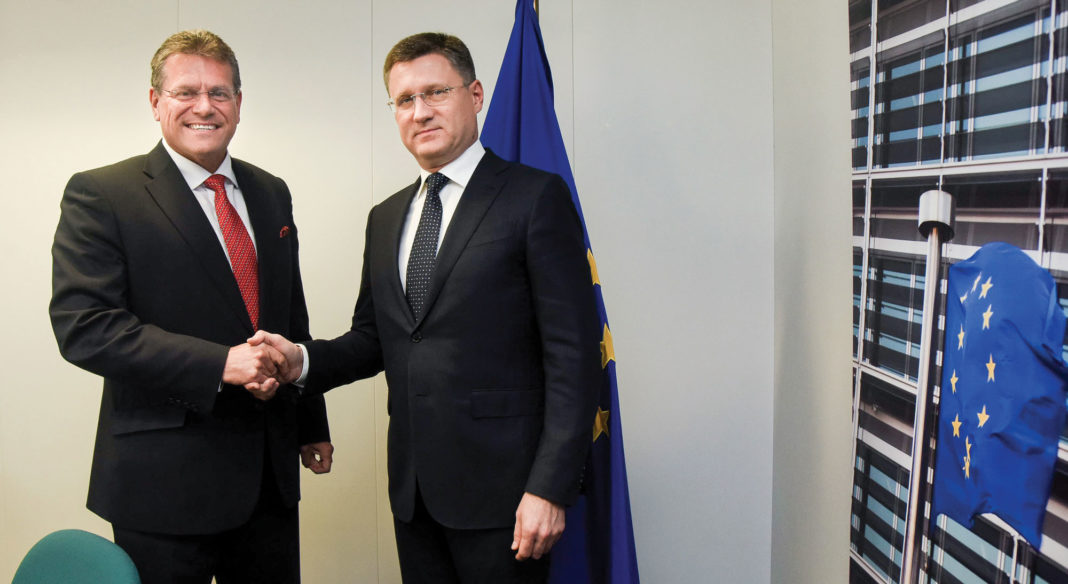 The European Union, Russia and Ukraine concluded on 28 October the fourth round of trilateral talks at political level on the long-term transit of Russian gas via Ukraine to Europe as of next year without positive progress towards reaching an agreement, European Vice President for Energy Union Maroš Šefčovič told a press meeting in Brussels.

“My message in all our meetings, both bilateral and trilateral was: the time is flying and given the date, there is – and there must be – a clear sense of urgency. Therefore, I appealed to everyone around the table to be as constructive as possible. Unfortunately, I have to say that I am disappointed by today’s outcome. And I say this very openly,” Šefčovič said, adding that there should have been political will in order to have positive progress. “Our objective was to arrive to common understanding on key principles regarding the future transit of Russian gas via Ukraine,” he said, adding that the clear understanding that the future transit contract will be based on the EU legal foundation.

“I hope that today we can have more conclusive discussion on tariffs and how they are set according to the new methodology which was adopted by Ukrainian regulator and which is fully compatible with European standards; I believe that we could have orientation discussion on the volumes of the future contract; I was also putting on the table the suggestions for the duration of the contract and I underlined the importance about the need to conclude and to sign as quickly as possible the Interconnection Agreement between Ukraine and Russia on the gas transit,” Šefčovič said.

“I listened very carefully also to the Russian side in our previous meetings and also I was studying carefully the outcome of the meeting of senior experts it took place a few days and I understood that for Russia there is a very important issue to find a solution to the Stockholm and Anti-monopoly decisions as well as potential volumes of direct gas sales to Ukraine,” Šefčovič said.

Šefčovič said that after long discussions and mutual explanations the parameters, which are presented being acceptable to Ukrainian partners and who were maybe ready to engage on this discussion, were not acceptable to Russia. “I would like to underline at this moment in time,” he said.

“I am disappointed but I am certainly not giving up because I think towards the end of the meeting, we had better understanding how we can progress in the future, what needs to be done and I’m also 100 percent convinced that there is a possibility to arrive to a balanced solution for all parties,” Šefčovič said.

“So what we agreed in our closing round of trilateral discussion was that we would intensify to the maximum the contacts among ourselves at first on bilateral basis between the companies and between the ministries and the administrations and I offered the possibility which was both welcomed by Ukraine and Russia for subsequent expert meeting where we can still clarify some of the technical issues like booking, like the methodology for tariff setting and other implications of the application of the European in the Ukrainian transit mechanism,” Šefčovič said.

Russian Rossiya-24 TV quoted Novak as saying on 28 October that the gas talks between Ukraine, Russia and the EU will continue at the end of November, just a month before the current deal expires, Reuters reported.

The EU Commission Vice President said he offered the possibility of the next round of trilateral talks on ministerial level, which was also accepted by all parties, to be held in November as soon as possible. “But I would like to have such a meeting well prepared where we have a reasonable chance for success. So, my appeal to all sides is to really use I would say every day, every minute for intense bilateral discussions between the countries, ministries and the companies because 1 January 2020 is around the corner and I think we know the know the issues, know the problems very well. I believe that we also feel where the solutions are, we just need to demonstrate the political will and art of compromise to find a balance solution for everyone which I’m strongly convinced is possible,” Šefčovič said. Šefčovič said.

Meanwhile, Unian quoted Orzhel as saying the Commission proposes a 10-year contract for 60 billion cubic metres of gas annually. He said Kiev has supported the proposal put forth by the Commission on amounts and timeframe of a new gas transit contract with the Russian Federation. “We fully support the position of our European partners, given the clear position of Ukraine regarding ensuring security of supplies in the region, ensuring stable supplies to the European gas markets, as well as stable volumes necessary for the operation of the Ukrainian gas transportation system,” Unian quoted him as saying after the talks in Brussels on October 28.

Meanwhile, according to Ukraine’s Naftogaz key provisions of the common position include the conclusion of the new long-term contract with fixed transit volume sufficient to ensure secure operation of Ukraine’s GTS. The contract should be concluded with Ukraine’s new transmission system operator (TSO), which is to be unbundled from Naftogaz group since 1 January 2020. Future relations between the new Ukrainian TSO and Russian gas monopoly Gazprom should be based on European energy law being implemented in Ukraine as an Energy Community member.

According to Naftogaz CEO Andriy Kobolyev, the same principles underlie Gazprom’s cooperation with all its counterparties in the EU. Kobolyev said he is confident that switching to common European rules will significantly facilitate cooperation between the Russian company and Ukraine.

The Ukrainian side also invited Gazprom to participate in public hearings run by Ukraine’s energy regulator to discuss and share their view on the new tariff-setting methodology, Naftogaz said, adding that it is based on the EU tariff network code and is expected to be in effect for the next 5-year period.