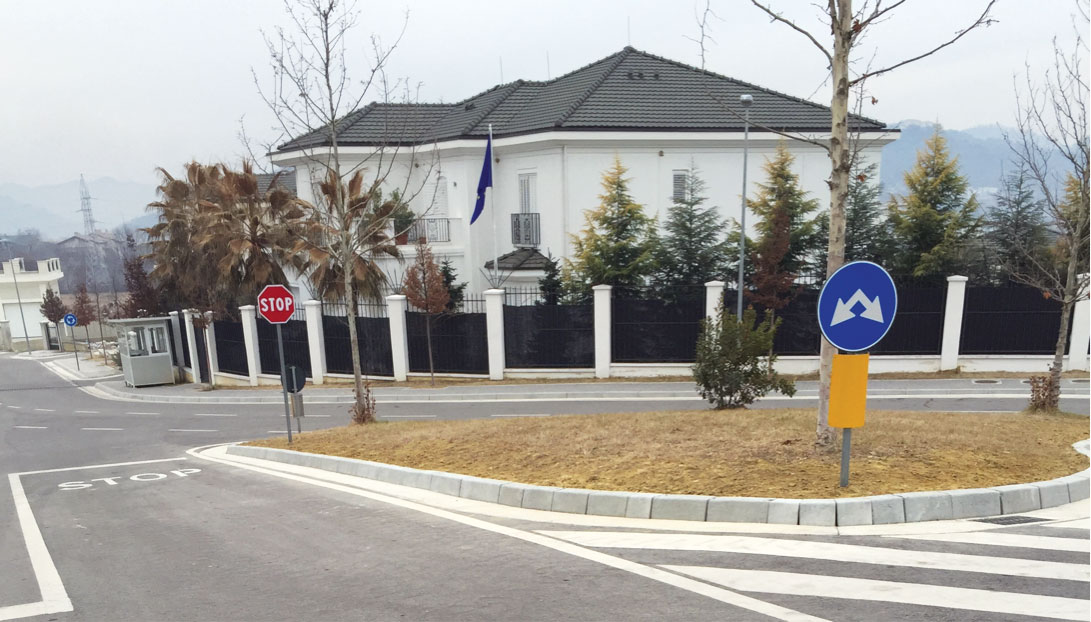 The European Commission has recently purchased a €1.65 million villa in the area of Rolling Hills on the outskirts of Tirana, Albania.

The villa houses the head of the EU delegation there, Ambassador Romana Vlahutin, who news website ‘Exit’ reports took over the negotiations for the purchase of the villa from the law firm that was previously handling the negotiations. Most curiously the report notes that the EU spent €4,700 per square meter, whereas the prices advertised for villas in Rolling Hills range from €1,000 to €2,000 per square meter.

Twice the size for half the price

What is even more impressive than the new €1.65 million, 345 square meter villa of the European External Action Service (which oversees the Delegations’ work), is the intense research project that buying this villa must have been.

A web search for ‘rolling hills villas for sale Albania’  get you one click away from a beautiful 3-story villa in Rolling Hills, for just over €850,000. Perhaps its 600 square meters however, felt too big for the Ambassador.

Despite criticism for the higher price, the lower price paid for cleaning services of the smaller space, and the larger depreciation rate that the larger villa would have had, will make up for the higher purchase price over time. 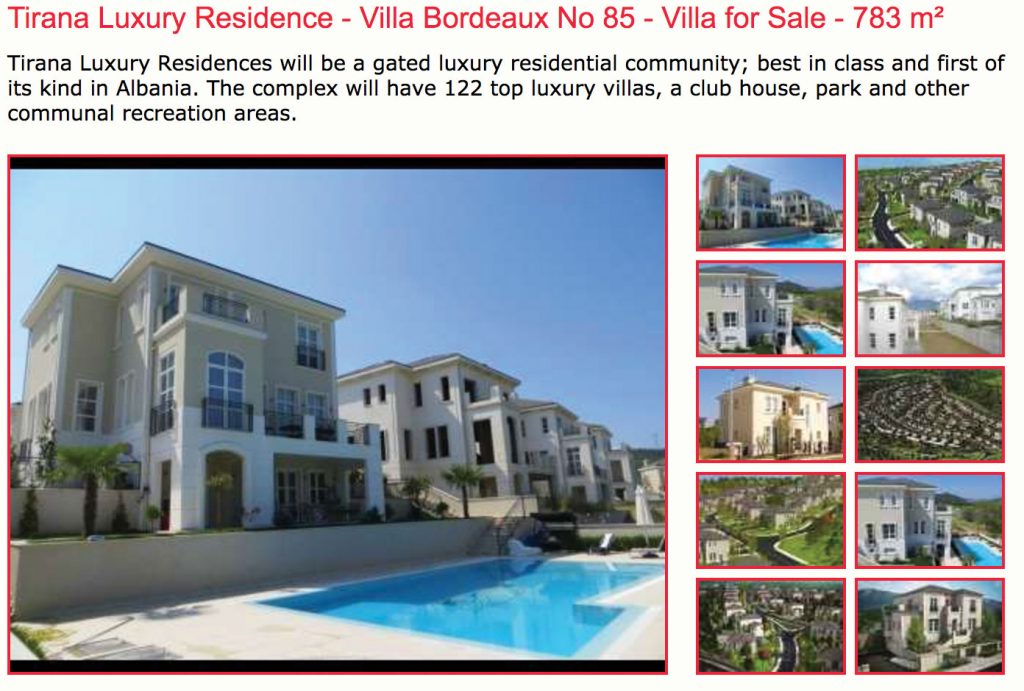 Transparency on the chopping block

Responding to New Europe, the EU foreign affairs spokesperson, Maja Kocijančič, said that the decision to select the Head of Delegation (HoD) residence in Albania was “the conclusion of a comprehensive analysis, including a market survey and an independent expert estimate.” In response to a request for these documents, Kocijančič, posited that the documents “are note made public.”

As a market survey and independent analysis cannot be considered commercially sensitive, New Europe has filed an official Access to Documents request asking for these to be made public in the interest of transparency.

How close is too close? How cheap is too cheap?

One of the arguments made in favour of the overpriced purchase is the proximity to the delegation. As the residence is located outside Tirana and rather far away from the EU offices at approximately 8 km away, this is hardly plausible. The price/quality argument also seems hardly convincing especially if we consider that Rolling Hills is a newly built residence complex, and that so far no other villa sale there has fetched such a high price.

Nevertheless, the EU considers that “taking everything into account, we expect considerable net annual savings compared to the previous rental arrangement.”

Indeed, previously the rental agreement for the residence before purchase was €8,000 per month.

On average, the monthly housing rental price per square meter for apartment, residence is around €13 (or €4485 for a 345 sq. meter residence); meaning the Albanian residence was shifting the average cost up quite significantly at over €23 per square meter .

In any case the €8,000 per month is more than the European Commission pays for office buildings in Brussels. And Tirana, is not Brussels. 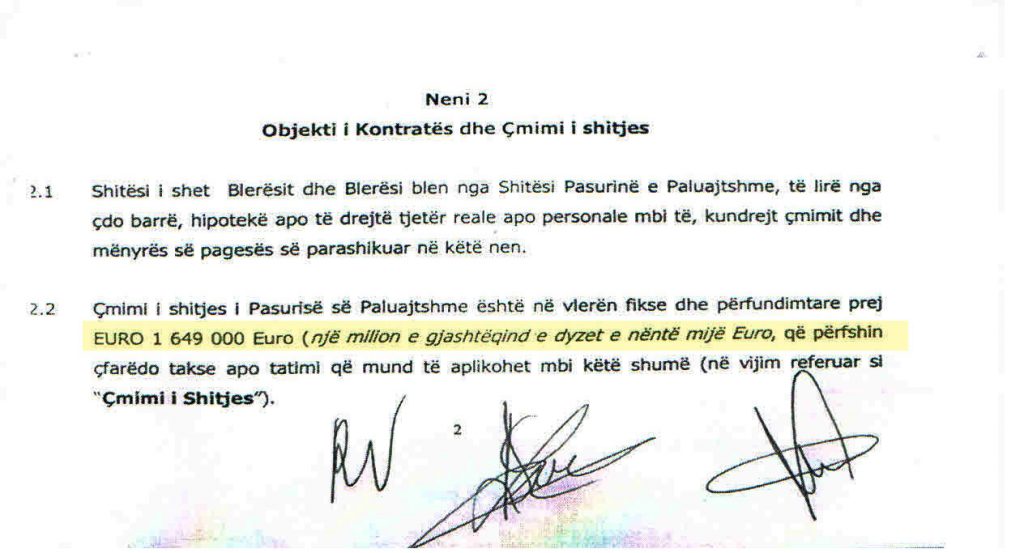 According to the 2012 discharge of the EEAS, it is the Head of Delegation who is responsible for the negotiations and contracting. Indeed, as can be seen for the purchase contract of the Rolling Hills villa, the Ambassador is the signatory. However, asked if the head of delegation had taken over the negotiations from a law firm, the EU spokesperson claimed that the negotiation which was “started before the current HoD was appointed, were held by the head of administration at the Delegation checked and finalised by the EEAS.”

Albania’s relationship with corruption and the delegation

The particular matter is quite sensitive in Albania, where corruption remains a reality. The 2016 Corruption Perception Index found Albania in 86th place, with one point more than Mongolia and Zambia.

Furthermore, according to the Corruption Assessment Report Albania 2016 of Seldi, “one in two Albanian adult citizens admit to being demanded directly or indirectly to bribe public officials (49.6 %). This shows increase of the corruption pressure from public officials on citizens compared to 2014 of around 5 percentage points”.

The European Commission’s delegation in Tirana also has a history of problematic behaviour. According to EU Observer, in 2007, two Italians, one a European Commission official and another a European Parliament assistant, were arrested for corruption, suspected of “bribes from real estate and security companies in return for rewarding them with contracts to rent, equip and secure the commission buildings in New Dehli and Tirana.”

More research into Ambassador Vlahutin, shows that Vlahutin has made statements to the press contradicting the European Commission’s official position as regards the progress made in the accession process of Albania – which was significantly more clear as to the steps Albania is required to make.

A source in Tirana told New Europe, that “Vlahutin does little hide her support for Edi Rama (the Prime Minister of Albania). Perhaps one should look into what interests the entourage of Rama has in Rolling Hills.”