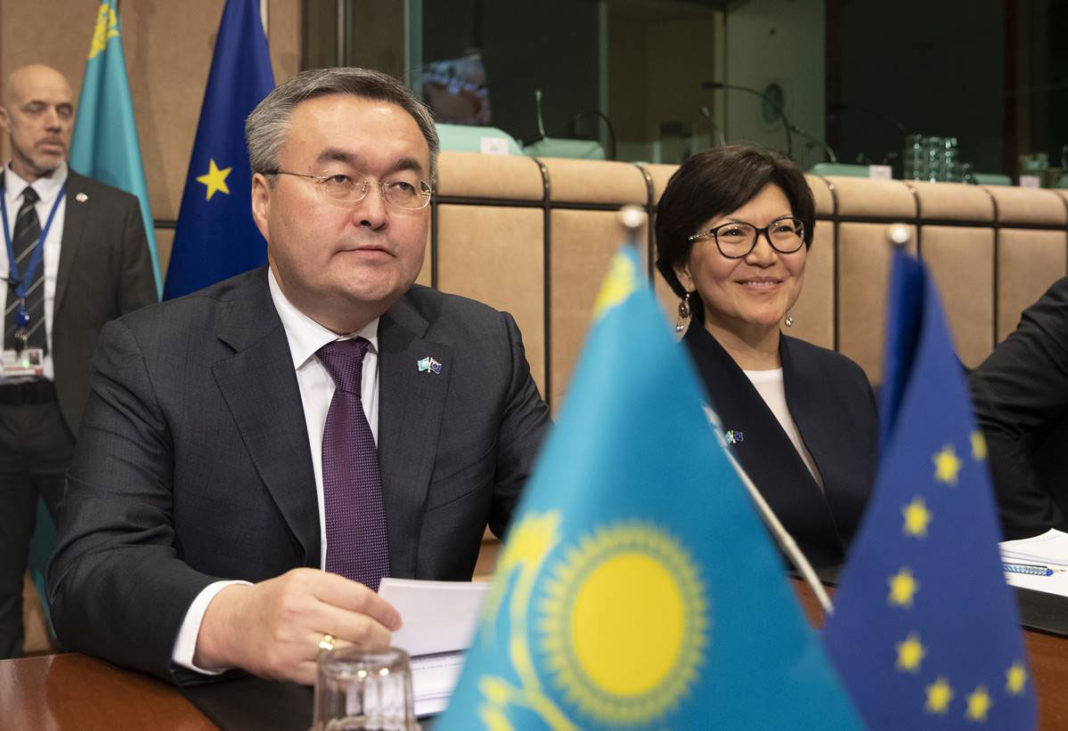 “The Cooperation Council welcomed the adoption today by the Foreign Affairs Council of the Council Decision on the Conclusion of the EU –Kazakhstan Enhanced Partnership and Cooperation Agreement (EPCA), signed in 2015,” Croatia’s Foreign Minister and Cooperation Council Chair Gordan Grlić Radman, whose country holds the rotating EU Presidency. “Our Agreement which has now been ratified by all EU Member States and the European Parliament will fully enter into force on 1st March 2020,” Radman added.

He also noted that efforts are made to facilitate the process of visa liberalisation.

According to the European Council, the full application of the EU-Kazakhstan EPCA will allow for even closer cooperation in areas which were not provisionally applied to date, in particular areas which fall under EU member state competence such as Common Foreign and Security Policy.

The delegation of Kazakhstan was led by Foreign Minister Mukhtar Tleuberdi, who noted that deepening ties with Europe is a strategic priority of Kazakhstan’s Foreign Policy.

The successful implementation of the EU–Kazakhstan EPCA in a number of areas was reviewed; including trade and customs, environment and climate change, energy as well as rule of law and judicial cooperation, the EU Council said.

Kazakhstan’s strategy towards a Green Economy

Highlighting that the implementation of a new European Green Deal is a top priority, the Cooperation Council welcomed Kazakhstan’s National Strategy towards a Green Economy and its ambitious 2050 energy targets which aim to have 50% of electricity generation from renewables.

The Cooperation Council also discussed the importance of good governance, the promotion and protection of human rights and cooperation with civil society. The EU welcomed Tokayev’s announcement to introduce a new public-assembly law and other reform steps including simplifying the process for creating political parties; and decriminalisation of Article 130 and Article 174 of the Criminal Code. Kazakhstan’s intention to start procedures to join the Second Optional Protocol to the International Covenant on Civil and Political Rights was also welcomed.

The Cooperation Council welcomed recent positive developments in the Central Asian regional cooperation. The EU thanked Kazakhstan for its active role in promoting peace, stability and security in the wider region, including with Afghanistan. Regional security was also discussed, including border management, counter-terrorism and the fight against drug trafficking.

The EU-Kazakhstan Council also discussed the creation of a high-level platform of dialogue with the aim of attracting more investments in the country. Kazakhstan is EU’s main trading partner. Nur-Sultan will host the 12th World Trade Organization (WTO) Ministerial Conference (MC12) on June 8-11 and will gather stakeholders together to discuss current challenges in the field of trade.

On 29 October 2019, WTO Director-General Roberto Azevêdo met on 29 October with Bakhyt Sultanov, Kazakhstan’s Minister of Trade and Integration, who is currently the Chair of the upcoming 12th Ministerial Conference. The two signed an Agreement between the Government of Kazakhstan and the WTO defining the roles and responsibilities involved in organizing the Ministerial Conference, to be held in Nur-Sultan on 8-11 June 2020. They also discussed various aspects of the preparations for MC12 and reiterated the importance of a successful outcome in the Kazakh capital.

In the margins of the Cooperation Council, Tileuberdi had a bilateral meeting with the EU High Representative, Josep Borrell, where they discussed EU-Kazakhstan relations as well as regional and international developments and cooperation.