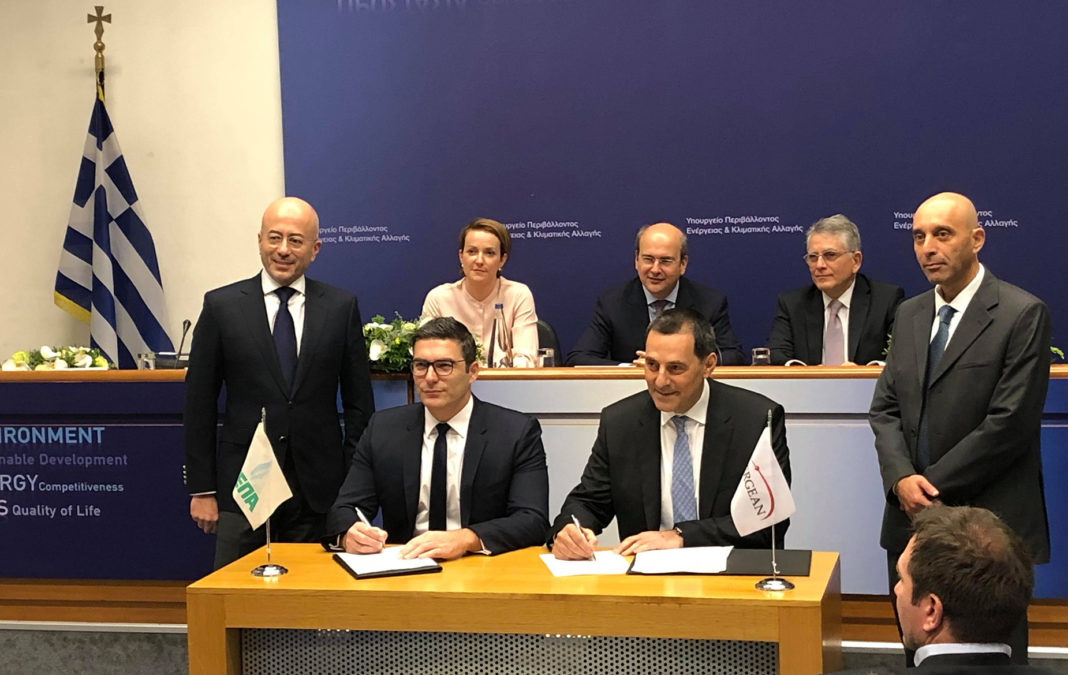 ATHENS – Several hours before the leaders of Greece, Israel and Cyprus signed an intergovernmental agreement to construct the EU-backed gas pipeline, Energean and the Public Gas Corporation of Greece (DEPA) inked a commercial agreement that paves the way for the financial viability of the EastMed project.

Energean and DEPA agreed on 2 January to cooperate to further support the EastMed Pipeline Project. The two companies have signed a Letter of Intent (LoI) for the potential sale and purchase of 2 billion cubic metres natural gas per year from Energean’s gas fields offshore Israel, where Energean is investing $1.7 billion for the development of the Karish and Tanin fields through the FPSO Energean Power.

At the signing ceremony, Energean CEO Mathios Rigas told New Europe the deal demonstrates the commercial interest behind the ambitious EastMed project to build an undersea pipeline to carry gas from new offshore deposits in the southeastern Mediterranean to Europe.

“Unboundedly today’s signature of this LoI demonstrates that this pipeline not only has the support of the governments and the European Union, but it also has significant support between us and first buyer, which is DEPA, and I’m sure a lot more will continue,” he said. “We have the gas in Israel, DEPA has the needs and they want to be a commercial player, so this pipeline connects the East Med with Europe and I think today’s LoI signifies this significant commercial interest behind the pipeline,” he added.

Also, at the signing of the commercial deal, Greece’s Environment and Energy Minister Kostis Hatzidakis told New Europe on 2 January the agreement between Energean and DEPA strengthens the viability of the EastMed pipeline. “As you know there were many doubts concerning the viability of this project. We’re not saying that everything will happen automatically, but today we had the first step which means, except the support from the European Commission itself, which supports financially certain studies concerning the project and the viability of the project, we had the first commercial agreement between Energean and DEPA which is a significant step forward and we believe that other steps will follow,” Hatzidakis said.

The chairman of the Institute of Energy of South East Europe, Costis Stambolis, who was also present at the signing, told New Europe on 2 January that a few agreements like the one signed between Energean and DEPA will ensure the financial viability of the pipeline. “As far as I’m concerned, this deal is far more important that the agreement which is going to be signed later today because this is where things start rolling. If you have agreements such as the one today then you can ensure the viability of the pipeline,” he said. “Unless you manage to secure the volumes that will go through with a very specific seller and a specific buyer then you do not have the framework for a viable pipeline. So, we need a few agreements like the one today so as to ensure the financial viability of the pipeline,” Stambolis added.

According to Rigas, Energean has firm agreements for the supply of 5 billion cubic metres a year of gas into the Israeli domestic market. Asked if this means that all future volumes discovered in Israel would be exported, he said, “I wouldn’t say all because the Israeli market continues to grow. The Israeli government has committed to shut down all coal-fired power generation so that will increase gas demand in Israel and we will continue to target the Israeli market, of course, but we have enough capacity in the FPSO, we have a lot of licences, we have a total of nine licences in Israel with a lot more gas to be discovered so I’m very confident that a lot more gas will be found and be transported through the pipeline.”

Meanwhile, Cyprus Natural Hydrocarbons Company CEO Charles Ellinas, commenting from his native Mediterranean island of Cyprus, was more skeptical. Asked if the agreement between Energean and DEPA paves the way for the transfer of existing and future Israeli reserves to Europe, Ellinas said, “It is a small start. But Energean has access only to relatively small quantities of gas. I am sure, though, that should the pipeline become viable, others will join, such as Noble Energy with gas from Israel’s Leviathan and potentially ExxonMobil with gas from Cyprus’ Glafkos.”

According to Ellinas for this to happen, the pipeline needs to attract and secure buyers for its gas in Europe. “And there lies the challenge. Because of the gas price in the East Med before it enters the pipeline and the high cost of the pipeline, by the time the gas arrives in Europe its cost will be too high, over $8/mmbtu (one million British Thermal Units). Current prices are around $4/mmbtu. These may rise but nowhere near the price needed for the EastMed pipeline to become commercially viable, for example over $8/mmbtu,” he argued.

With the continuous growth of renewable energy, Europe has a glut of energy supplies keeping prices low, Ellinas argued, adding that with the forthcoming Green Deal, increasingly the future in Europe is clean energy, away from fossil fuels – including unabated gas.