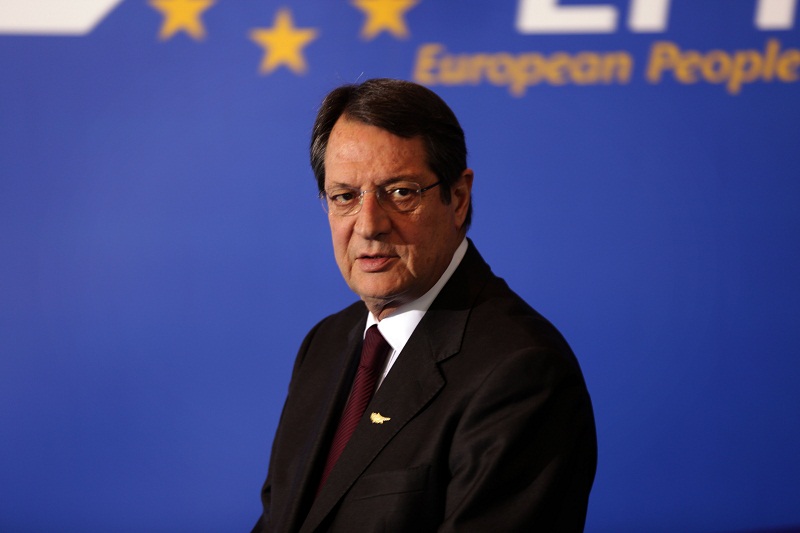 Cypriot presidential candidate Nicos Anastasiades received clear support from the island’s main EU partners in begin January during an extraordinary EPP (European People's Party) Summit in Limassol. He said Cyprus was determined to implement all measures required for the consolidation of its economy and the creation of prospects of recovery and growth. Anastasiades, who had a private meeting with the German chancellor Angela Merkel, underlined Cyprus, was “not asking for any special treatment and that we will be consistent with all our obligations”.

The DISY leader was one the most fervent supporters of the Annan Plan for Cyprus, the UN proposal to resolve the Cyprus dispute back in 2004, even though a majority of his party voted it down. On his official website, he underlines his support for Cyprus to accede to the NATO’s Partnership for Peace, a program of bilateral and security cooperation between individual countries and NATO.

In February 2011, the House of Representatives voted to join the Partnership for Peace, the final step for Cyprus to join NATO. Anastasiades warmly supported the resolution, in hopes of giving Cyprus a bigger role in EU-NATO co-operation, thus boosting efforts to reunify the island. However, current president Christofias vetoed it, stating that such membership was not in line with his vow to achieve a peace deal with Turkish Cypriots.

Nevertheless, Turkey, a full member of NATO, is likely to veto any attempt by Cyprus to engage with NATO. The Turks do not recognize Cyprus as a member of the EU. Ankara prevents high-level formal meetings between NATO and EU’s Political and Security Committee (PSC) by stating that Cyprus does not have any security clearance from NATO. Because each NATO member has a veto, Turkey can stop discussions between NATO and the EU over military operations and intelligence issues.

Before his election, current president Demetris Christofias said he would be a one-term president, unless a solution to the island’s decades-old conflict was in sight. Fresh reunification talks between the two sides were launched after his election in 2008, but have failed to break the impasse in place for decades.

His proposals for a federal state included the rotation of the presidency between the two communities on the island. The negotiations made slow progress over property rights and territorial limits, then stalled after the April 2010 elections in the northern occupied part of Cyprus, in which Dervis Eroglu of the pro-independence National Unity Party was elected.

During a meeting with Barroso in June 2012, Anastasiades said that negotiations between Greek Cypriots and Turk Cypriots need to find a way out from the deadlock. The DISY leader noted that the negotiating process needs to be enlarged and include the EU and Turkey. Anastasiades added that Ankara will then assume its responsibilities and contribute in a constructive way to a Cyprus solution.

Christofias, once the island’s most popular politician, announced that he will not be seeking reelection. He has seen his ratings plunge on the back of the worst recession in 40 years, and the bungled handling of Cyprus’s worst peace-time disaster when nearly 100 containers of confiscated Iranian explosives accidentally blew up the island’s largest power station at Mari in July 2011.

Some months later the results of an official investigation were released to the public, placing the blame for the incident mainly on president Christofias, holding him “personally and institutionally responsible” for the blast that killed 13 people. Christofias rejected the results of the investigation and denied any personal responsibility for the tragedy. The economic impact of the explosion was estimated at € 2.4 billion, representing 13.8% of the Cyprus GDP, according to estimates by Credit Suisse.

After Nicosia's access to international capital markets was cut off because of high yields on its traded debt, the Cypriot president turned to Russia for help. Moscow gave Cyprus a € 2.5 billion loan in late 2011. For the Russians, it was probably a way to stabilise a country with millions of Euros in Russian bank deposits and real estate investments. For Christofias, it was a way to get funds and avoid having a Greek style bailout with Troika supervision. A second Cypriot request for a € 5 billion loan from Russia has so far gone unanswered.

Nicosia sought financial aid from the Troika (EC, ECB, IMF) in June 2012 after its banks were battered by their exposure to the Greek crisis and the destruction a year earlier of its most important power station. Begin December, Nicosia and the Troika have agreed on the terms of a bailout estimated at around € 17 billion. Up to 10 billion could be allocated for the recapitalisation of the banks, 6 billion for debt refinancing, and 1 billion to cover government spending. President Christofias defended his economic policy and blamed banks and the capitalist system for the global crisis.

During the meeting of 21 January, euro group finance ministers decided that the bailout of Cyprus – originally expected to lead the agenda – must wait until the spring following concerns about the size of the rescue package. Jean-Claude Juncker, the outgoing head of the group, said a decision on a package would be left until at least March because "negotiations are ongoing".

German finance minister Wolfgang Schaeuble even questioned whether any bailout should even take place. "We have to examine whether the problems in Cyprus represent a danger for the eurozone as a whole," he told the Sueddeutsche Zeitung. But without financial assistance the country could face bankruptcy within months, possibly forcing it to leave the eurozone.

In absolute terms, € 17 billion is not so much compared to the bailouts for Greece, Portugal and Ireland. But in relation to Cyprus' economic output, it is a considerable amount, equal to its annual GDP. However, the economic adjustment programme and banking sector reforms should be seen as a catalyst that will reinforce macroeconomic and financial stability in the country. Over the longer term, the exploitation of natural gas discoveries should substantially boost growth prospects and help lower debt. With the US estimating the region holds about 122 trillion cubic feet of gas, Nicosia would be able to repay the Troika quite smoothly. Petroleum wealth could even change the political picture on the island in the years to come.