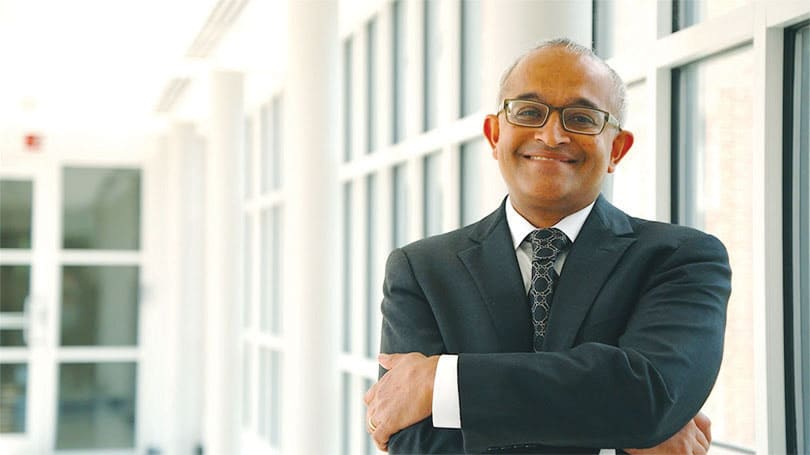 In today’s world, the capture of a terrorist leader or the destruction of a terror cell is one of the basic functions of any intelligence agency in the world today. Computer scientist V.S. Subrahmanian is applying a big data approach to fighting terror by trying to put more objective analysis into decisions about which terrorists to target.

His work stands squarely at the intersection of big data analytics for increased security, policy, and business needs.

Using sophisticated software, Subrahmanian – a Dartmouth College Distinguished Professor in Cybersecurity, Technology, and Society – calls the programme STONE, short for the Shaping Terrorist Organization Network Efficacy. It is a schematic of a terrorist network that identifying individuals, subgroups and affiliations. The software assigns a number to measure the lethality of the terror organisation, the higher the number, the more dangerous the group is.

Subrahmanian’s scalable methods to apply probability models in a wide variety of real-world scenarios and has created a field of computational cultural dynamics to analyase the behaviours of terrorist groups in order to make forecasts about the activities of groups like Hezbollah, Lashkar-e-Taiba, and the Indian Mujahedeen.

These methods have since been applied to a variety of problems including predicting the stability of nations and when protests will turn violent, as well as being able to gauge when a systemic banking or health crisis may occur.

The STONE technology uses open source data to identify the successors of captured terrorist leaders as well as predicting how their groups will change.

New Europe sat down with Subrahmanian on the side lines of the Digital Meet Festival at the 13th-century University of Padova to discuss how technology can be used to crack down on terrorist groups.

New Europe (NE): How did you construct a method to predict the behaviour of terrorists and how did you put in practice?

V.S. Subrahmanian (VSS): We were one of the first to look at developing a series of models that could predict the behaviour of terrorist groups through what we learned from our friends in political science. One of my colleagues built a data set over the years where he took a terrorists group and reduced it to a spread sheet. He then used statistical analytics to build a spread sheet that was much better because we, as computer scientists, can come up with much better predictive models that are not just statistical models, but ones that enable us to make valid calculations. I think we learned from our political science colleagues and built on their knowledge and combined with it ours to deliver a result which was much better than what existed at that time.

NE: Can you make give some examples of this method?

VSS: We took the terrorists group Lashkar-e-Taiba, the one that carried out the 2008 Mumbai attacks, where we gathered 28 years of data about them with each month corresponding to a spread sheet. For each month, we tracked not only what the group did, including the different types of attacks that they carried out – the bombing of transportation or tourist sites or attacks on security personnel and installations. These were the things that we wanted to foretell, but we also wanted to predict the next attack on the basis of the circumstances around the previous incident. It was important to answer what the group stood for and what their leadership structure looked like, as well as what other actors were doing to the group, i.e. if their members were being killed or arrested. From this we learned that we were able to come up with some very good predictions about the future activities of these these groups.

NE: Regarding your looking into Lebanon’s Iranian-backed Shiite terrorist group Hezbollah, what were you able to predict or better understand?

VSS: This was a very preliminary study and we wrote a paper in 2008 and afterwards a journalist in Beirut wrote an article on our paper in which he called up Hezbollah and commented our work. “These guys in America are crazy“ was Hezbollah’s implied response. For the next year, though, our prediction turned out to be exactly what happened. We were in a rather unique position where we knew what was predicted, which was published, and Hezbollah knew what we’d written and they went ahead and acted exactly in accordance with our behavioral model.

NE: What’s the best way to destabilise a terrorist network?

VSS: We have to look at a set of actions – Can we understand who in these organisations the key and can we find a way to remove them from the theatre of operations. One way to do that is simply to offer a reward for their capture and if the reward is large enough people might turn them in, even if they are good friends. That means it doesn’t necessarily involve going after the guy with a special-ops group, but rather to understand who the key player in the network is because it is not necessarily the leader. It could be that a network can be better destabilised by removing its lower-level figures. To better explain better, I would like to use again the example of the Lashkar-e-Taiba terrorists group. The leader of this group has a $10 million bounty on his head right now. He has not been captured even though we’ve known for a long time where he is. He gives speeches that attract thousands of people. Perhaps one reason he hasn’t been apprehended is, according to our model, that his terror group would become more violent if he were to be eliminated or imprisoned.

NE: About Boko Haram in Nigeria? What has been your experience with this terror organisation?

VSS: We have been coming up with predictions about them at the end of every month since the end of January. Those predictions have been coming out pretty well. I should emphasise that they are not intended to be 100% pinpoint accurate, instead they indicate that “this kind of attack is expected to happen this month or sometime in the next two or three months”. It doesn’t give you an exact date or location, but it does point you in the direction of where things might be going or what kind of attacks could be of a high probability. This gives the authorities the chance to plan counterterrorism actions and allocate resources if they are needed.

NE: You are using algorithm-based models to predict certain types of human phenomena, what can they also do to predict the future?

VSS: As long as they have real world data’s, algorithms can take that data and can fairly good build a simulated model that will vary based on the type of data that is available. For example, if the data doesn’t measure the right variables, we will not be able to have good forecast. In the coming years we expect to see AI and machine learning revolutionising several things, including understand when someone is exposed to an illness before they get sick. The algoruthms can also be used to better understand risks in the financial system and overall national security.

NE: On the issue of cyber-security, which tools do we need in the battle against hackers?

VSS: I think the main tool is to use common sense. Attackers leverage the fact that victims make mistakes. That means that every time we do something, we need to think about it. About solutions, I think that technology is not going fully to avoid the problem but it can be used to implement systems that automatically provide warnings to users.