The Commission’s secret deal on tobacco 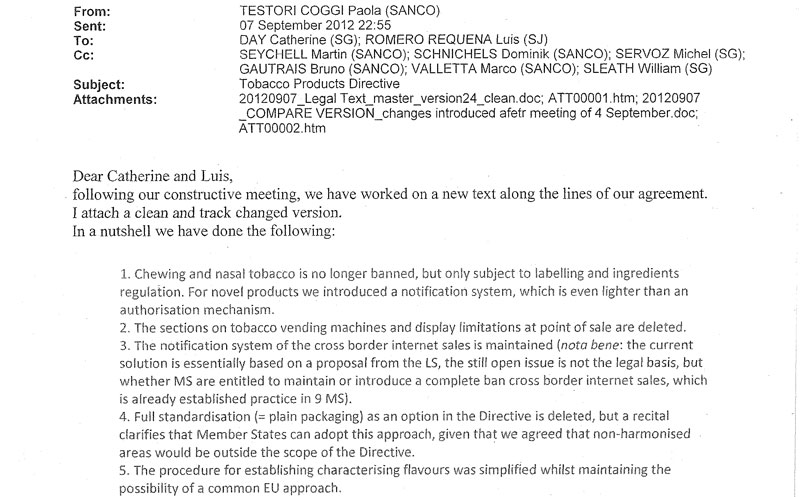 Former Health Commissioner John Dalli’s version of events, before and after his dismissal has been constantly challenged, but never shown to be wrong. The more evidence that is revealed, the more convincing his story becomes.

The emails below speak for themselves.Dalli has said that he would not and did not change the Tobacco Directive. Even the OLAF report, used as the excuse to dismiss him makes this perfectly clear.

As we will show, the directive was changed, on 4 September 2012 – but the commissioner was not informed or involved.

Paola Testori Coggi (Director General of SANCO) sent an email to Catherine Day (Secretary-General of the European Commission) and Luis Romero Requena (Director-General of the Legal Service) on 7 September at 22:55.

The email was copied to:

Attached were two documents. We will return to these shortly, but first off all; the email that shows the Commission changed the Tobacco Products Directive:

Following our constructive meeting, we have worked on a new text along the lines of our agreement. I attach a clean and tracked changed version.

In a nutshell we have done the following:

1. Chewing and nasal tobacco is no longer banned, but only subject to labelling and ingredients legislation. For novel products we introduced a notification system, which is even lighter than an authorisation mechanism.

2. The sections on tobacco vending machines and display limitations at point of sale are deleted.

4. Full standardisation (=plain packaging) as an option in the Directive is deleted, but a recital clarifies that Member States can adopt this approach, given that we agreed that non-harmonised areas would be outside the scope of the Directive.

5. The procedure for establishing characterising flavours was simplified whilst maintaining the possibility of a common EU approach.

6. On nicotine containing products the need to ensure a level playing field for pharmaceuticals and products with high nicotine dose was confirmed. For products with low nicotine content a labelling provision was introduced to facilitate consumer choice/information.

In conclusion I trust that the new text reflects our agreement and I hope we could agree to launch the interservice consultation soon.

New Europe sent a copy of the email to Catherine Day, asking for her confirmation of the authenticity of the email and asked to be provided with copies of both the documents attached:

We would have expected a quick reply from Day, but we are confident that she had a very good reason for not confirming or denying the accuracy of the email. But, of course, if the email is inaccurate, why did she pass on the message to M Simon?
John Dalli did not accept the changes made to the Directive, and on 16 October, he was dismissed.