Victoria Moran is a journalist at New Europe. 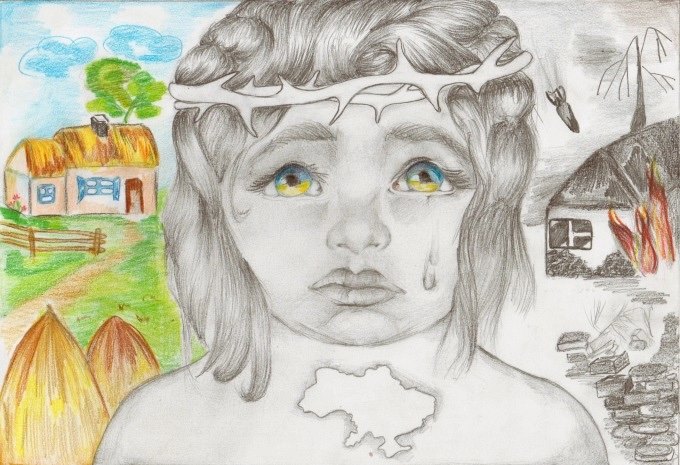 “At four a.m., there were heavy bursts. Dad was running in the house and was closing everything in order to sleep and not hear it,” a young boy recalled as he addressed the camera. Darina, a seven year old girl from the Donetsk region, told viewers she “dreams about the day when children will not play with shells and will not hear the explosions.”

Last Tuesday, the Royal Museum of Natural Sciences in Brussels hosted an exhibition entitled “Peace and War Through the Eyes of Donbas Children.” Officials showed short videos introducing the exhibition’s visitors to the pain children in war-torn Ukraine experience as the conflict continues to engulf their homes. The event in Brussels was just one chapter of a long-term project being conducted throughout Ukraine and is expanding to foreign communities.

Ukrainian community initiative Restoring Donbas organized a drawing contest for children living in the country’s eastern conflict zone last year. Young artists throughout the region submitted over 300 drawings depicting what is “in their hearts and in their minds,” according to Olena Petryaeva, head of Restoring Donbas. The competition was held throughout the summer months and those in charge of selecting a winner paid special attention to artwork coming from orphanages and temporary safety camps for Donbas children.

“This exhibition was shown in many regions of — almost half — of Ukraine, and many people have seen it,” Petryaeva said. Restoring Donbas organized various award shows, art showcases and concerts to honor the competition’s young participants. From September of 2015 through this past January, the initiative hosted exhibitions in the Kyiv, Zhitomir, Chernivtsi, Sumy, Kharkiv, Kramatorsk and Lisichansk regions. These events aimed primarily to introduce Donbas children to other Ukrainian youths, with the hope that facilitating communication and empathy amongst the children of the country will “become the key to unity and a source of inner strength to overcome the difficulties in Ukraine today,” according to informational materials provided by Restoring Donbas. “Of course, we wanted to show it in other countries, and first of all we wanted to come [to Belgium] to show what is inside of these children,” Petryaeva said.

Tuesday’s event featured a collection of striking drawings, which lined the walls of the museum and a number of pop-up walls erected by the event officials. Visitors were invited into the space by staff and offered guidance and context for understanding the gravity of Ukraine’s strife. Several drawings featured two disparate scenes, one characterized by bright colors and pleasant scenery, which presumably represented times of peace in Ukraine. The adjacent scenes were sinister, often displaying flames, crying children and those same neighborhoods in states of wreckage. One drawing even labeled one image with the Russian word for “war,” and its counterpart with the word for “peace.”

15 year old Sofia Sbitneva, the winner of the drawing competition, described her piece as a “stressed” picture, and said it was inspired by her own experience with living in the conflict zone.

Sbitneva emphasized the importance of displaying humanity for those affected directly by the conflict in eastern Ukraine. “People must know about this problem because [Belgium] is not so far from Ukraine, as you know, it’s only two or three thousand kilometers, and everything will happen maybe to every person in every country,” Sbitneva said.

Her goal to elicit visitors’ empathy was fulfilled, as Sbitneva expressed positive feelings with regards to the exhibition in Brussels. She said, “People came here with another mentality and they tried to understand our problem, and maybe help with some decision. And also they were talking about this problem very sincerely.” For Sbitneva, it seems the initiative’s work has provided a glimmer of hope.

Petryaeva — who maintains that it is up to adults to preserve prospects for Ukrainian children’s bright futures and, thus, the future of the nation — identified a lack of news coverage on the conflict in her home country. “First of all, we wanted to show in this exhibition the problem exists in the Donetsk region and Donbas society,” she said. “Yes, we understand that the problem in Syria also [exists], but on news, on TV sets, there is no information about situations that exist in our country.”

The Restoring Donbas initiative was spearheaded in November 2014 and serves as a network of activists who fight to revitalize the Donbas region, which withstands the ongoing effects of violent conflict and economic unrest. Over 120 thousand people are active members of the organization, which addresses the needs of primarily those remaining in the conflict zone and IDPs via several projects and online activity.

Oleksandr Klymenko, founder of Restoring Donbas, has echoed Petryaeva’s sentiments. Donbas is a region of humanitarian catastrophe and should not be forgotten by the global community, he said in informational materials provided at Tuesday’s event.
As did Sbitneva, Petryaeva underscored that showing kindness to those inhabiting war-stricken areas is a matter of tending to the universal human condition. “Every person must realize that everything can happen [to] every person, in every country, and we must be together every time. Our organization helps these children, these people who are staying now in the Donetsk region and who are living in this region, and we want to help them [in every way] we can,” she said.