Another good day for the Italian treasury and the Eurozone 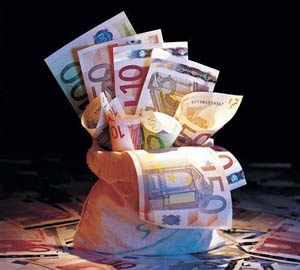 In total, the Italian Treasury cashed in €7.015bn from the three auctions, which were estimated to fetch between €5-8.5bn.

Despite the fact that the Italian bond issues came over two consecutive days, capital markets responded positively, despite comments by analysts about the creditworthiness of the bond issues of southern Eurozone countries.

The results of the two day auctions of Italian debt today and yesterday, may be considered as a good indication that markets are now distinguishing clearly between issuers.

Two weeks ago investors accepted an interest rate as low as an unprecedented 0.29% at a German ‘bunds’ issue, and today they appeared to have a better opinion than some weeks ago for the Italian debt paper. Given that Spain is also borrowing at lower interest rates than Italy and seeing Ireland planning to enter the markets after one year, the overall image of the Eurozone's debt papers seems to overcome the fears of contagion from the Greek ‘tragedy’, which continues to be staged under the Athens Acropolis.

The probability of a Greek default is not considered any more as the endgame for the entire Eurozone, and investors appear ready to see huge differences in the future prospects of individual Eurozone countries. This is partially the outcome of the 9 December EU summit, where the 26 leaders, the exception being David Cameron, decided to create a fiscal union within the EU and set aside around €800 billion to take care of the Eurozone’s sinners.

On top of this, the European Central Bank (ECB) this week handed out loans of almost half a trillion euro to more than 500 Eurozone banks, thus convincing the markets that no bank in its 17 member states will left out in the cold. Eurozone banks’ liquidity is also guaranteed in all the major currencies after the ECB formed an alliance with the American Fed, the Bank of England, the Bank of Japan, the Swiss National Bank and the Bank of Canada.

Recapitalisation of Eurozone banks, including the Greek ones, is also guaranteed through the European System of Financial Supervisors (EFSF), and its successor, the European Stability Mechanism (ESM) dowry, of €600 billion.

This is not to underestimate the fact that the newly found liquidity of the Eurozone’s banks can also greatly help the relevant governments in their efforts to place more debt paper in the primary market, or support debt prices in the secondary market.