All roads lead to Rome, which in this case is the containment of China 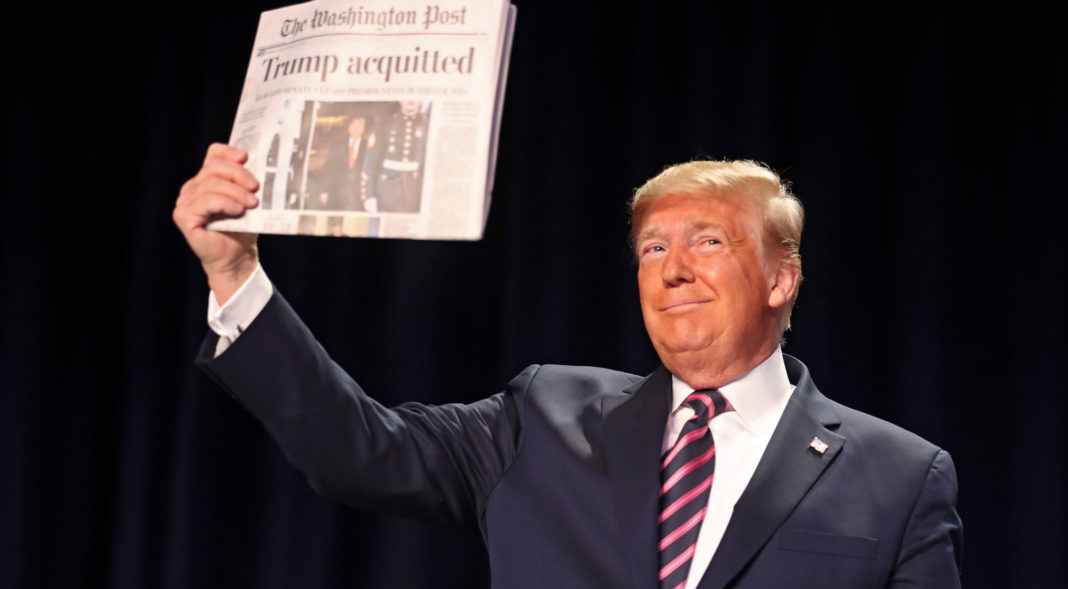 After the acquittal of President Donald Trump by the Senate in the impeachment trial, as was expected, the road for his re-election in November is open.

The impeachment was erroneously and grossly mishandled by the Democrats who initiated the procedure knowing it would not succeed, but did so anyway in the hope that it would damage Trump’s chances in next autumn’s election. The effort epically failed and now Trump is cleverly tackling the issue in a very business-wise manner as he turns liabilities into assets.

In the event that Trump wins the next election, which now seems most likely, his geo-strategic priority is likely to be the containment of China, which means a total isolation that would result in a complete ban on all Chinese products from Western markets.

The argument by conservative Americans, and by many Europeans, is that if China is not contained now, in twenty or thirty-years’ time, Beijing will dominate the world first commercially, then economically, and finally politically.

Trump is moving very carefully as he knows the main supporter of Chinese interests worldwide is Wall Street. A potential total ban of Chinese products will imply huge losses for both American and European investors in mainland China and a foment a degree of general disorder on the financial markets, of which nobody, for the time being, can fully anticipate what the magnitude might be. An exercise of this scale may in fact go as far as to end up with a total reset of the global financial order.

The containment of China is a high-risk operation as it implies unforeseen direct and collateral damages. However, this is the game and it happens at a time Western societies, one after another, are descending further into an endless downward spiral of political crises that are bringing about tectonic social changes.

Europe, after the withdrawal of the UK and the rapid decline of German influence on the political course of the EU due to the anticipated retirement of Angela Merkel, seems leaderless and is making one major political mistake after the other.

As a consequence, Germany, formerly the leading political power of the bloc, is now waging useless battles with the ghosts of the past by interpreting the rise of the anarchist AfD party (Alternative for Germany) as a rise of the far-right. This is not true. It is only the result of over a decade of protracted austerity, which is increasingly turning the formerly flourishing European middle class into a growing class of neo-poor.

On the other side of the Atlantic, the US is being led by a successful businessman who is handling political problems with a high-risk, high-reward approach.

In this context, Trump sees an opportunity in the main topic of concern of the day – the climate crisis. He is cleverly manipulating the various “useful idiots” that are synonymous with the climate question and is turning the issue of the environment into a new ideology to trap China, which in real terms, is the number one polluter in the world.

Provided that Trump wins re-election in 9 months, a total ban of Chinese products from Western markets will be a logical consequence of what is happening today until China finally reduces pollution to the minimum acceptable levels.

The Trump administration has very intelligently manipulated the youngsters of the world to elevate the climate problem as the next global ideology. And adding to the fact that China is under totalitarian rule and, by Western standards, the Chinese working class does not have any labour rights and are often compelled to work under forced labour conditions, the isolation of China will not be at all impossible.

The beauty of this exercise seems to be that the whole initiative originated from anti-establishment elements that are predominant in both Europe and the United States.

In this context, it seems not at all coincidental that several Western mainstream media outlets are overemphasising the dangers of a potential coronavirus pandemic, which generates widespread panic in Europe and the US.

The virus did, indeed, originate in China and was, reportedly, originally covered up by the country’s Communist authorities. The situation has since created a wide-spread negative global opinion of China, which ends up being a useful element, if there ever was one, for any future attempt to isolate the country.