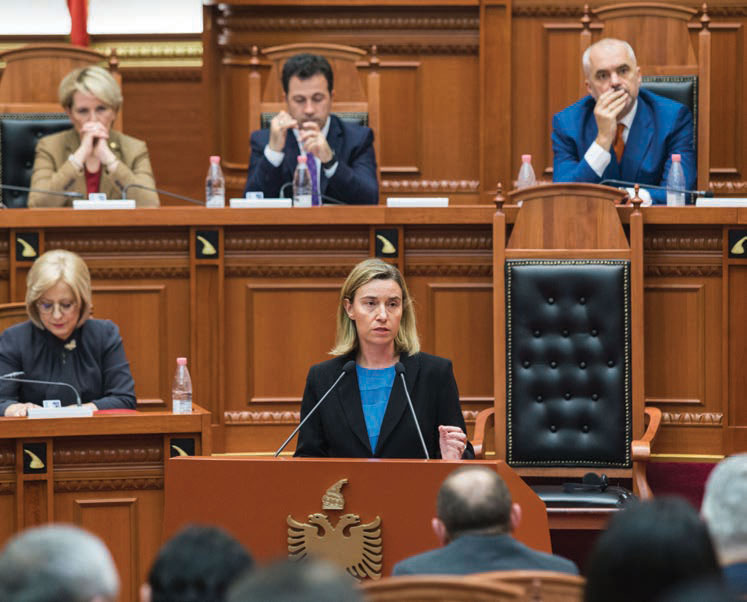 Albania-Tirana – As 2016 comes to a turbulent end, it is becoming increasingly clear that the international order and particularly the European structures are faced with huge and unpredictable existential challenges of historical proportions.

While these new developments unfold in 2017 and beyond, we in South East Europe, and especially in the Balkans, have to ensure that the founding European Union values and Trans-Atlantic commitments, despite current challenges, are advanced and spread across our institutional and political life.

Albania, a modest country in South East Europe is progressing steadily in its journey towards European Integration, despite its own challenges and enlargement fatigue that the EU is faced with.

By the end of 2016, Albania received a positive recommendation from the European Commission for opening accession talks for EU membership which was echoed by member states at their December European Council meeting in Brussels, on condition that the country advances with the implementation of its crucial and milestone ‘Justice Reform’ which will see its entire justice system overhauled and hopefully reorganised for good.

A more constructive and cooperative internal political climate, especially on issues of European implications, would serve Albania’s undeniable weight in the region and beyond.

Under my responsibility as Speaker of the Albanian Parliament since 2013, I have worked to encourage our political class towards a gentlemanly agreed consensus that when it comes to our strategic foreign and regional policy decisions, we have to be united in projecting a clear, strong and irrefutable national vision.

Although a modest country in geographical terms, Albania has a specific role to play in the Balkans.

This is not only because of the Albanian ethnic populations surrounding its borders, in Montenegro, Kosovo, Macedonia and southern Serbia. It is also because Albania is without doubt the most pro Euro-Atlantic country in the region and as such, it carries a special responsibility in order to advance the Trans-Atlantic agenda in our fragile region.

Since the fall of communism, the transition period of South East Europe has strongly been affected by the wider Euro-Atlantic agenda, with each country aspiring to join the European Union and NATO.

On the other hand, the European Union itself and NATO’s own transformation after the Cold-War have been immensely influenced by developments in our region, which proves its undeniable geo-strategic importance.

This becomes even more relevant for the upcoming year and the next decade to come, as various world players compete to extend their influence across the region.

As the unprecedented migration crisis and terrorist attacks have shown in the past two years, Europe as a whole has to be more united, more coordinated and better prepared for future potentially destabilizing developments of huge human proportions.

Uncertainty, inconsistency and dissonance in how we tackle future challenges will almost certainly increase insecurity for our societies, and continue to push desperate European citizens to offer support to nationalist, populist and xenophobic political alternatives, which may put the entire Western order to question.

Brexit was the first alarm bell to a new and uncertain order in Europe, and upcoming elections in the Netherlands, France and Germany raise fears that a weakening European Union may not be good for the rest of Europe, and it certainly would not be good for our part of the world which has historically been torn between West and East.

In this context, Albania has to empower its traditional positive and constructive foreign and regional policy with a sharper sense of visionary approach, firm in our sincere belief that the full integration of all our neighbours in the EU and in NATO will serve not only the future of our citizens, but will add to the security and stability of an entire continent.  Faithful in our strategic alliance with the United States, which we will continue to advance with the new American administration, and clear about our full integration into the European Union, we rely on a strong and healthy Trans-Atlantic partnership.

This means a solid and fully completed Europe with the Balkans as its integral part, and a strong and efficient NATO.

Albania will continue to work against any nationalistic or populist alternative in our region, convinced that only an open, democratic, pluralistic region without barriers guarantees stability, security and social progress for our societies.

Guided by the unchangeable principles of open, sincere and good neighbourly relations, we will continue to support the acceleration of the Euro-Atlantic integration of all our neighbours, as the only alternative which solidifies peace and security for the future.

This is why the Albanian Parliament was amongst the first to ratify Montenegro’s Accession Protocol with NATO, delighted that our northern friend’s membership into the Alliance will complete a fully secure and guaranteed Ionian-Adriatic coastal corridor.

We will continue to intensify our excellent cooperation with Montenegro and rely on its Albanian minority as an excellent bridge of friendship and partnership.

Our very close relations with Kosovo have been elevated towards a more qualitative institutional cooperation which benefits exchanges on both sides of the border.

Albania will continue to lobby for more international recognitions of Kosovo’s independence while we will push forward the agenda of its integration across regional and international organizations. This is imperative for Kosovo’s citizens and vital for the entire region.

The EU must no longer delay the visa-free regime for Kosovo’s citizens while the dialogue between Serbia and Kosovo should advance with tangible results and through a constructive and mutual understanding. Albania will continue to push for a full normalization of the Serbia-Kosovo relationship, which should ultimately culminate with Kosovo’s recognition.

Albania must and will continue to foster closer and more open relations with Serbia, because if the region is to advance, it must leave behind old habits and barriers, and move forward towards more political, cultural, commercial and economic exchanges.

The honest engagement from Tirana, whether with our counterparts in Belgrade, or with our ethnic Albanian representatives in Preshevo Valley in southern Serbia, has always been driving relations towards a positive trend.

Meanwhile Albania will continue to increase its contribution for a stable and developed Macedonia, which needs to be fully integrated in NATO and the EU. The Albanian Parliament will continue to encourage the substantial ethnic Albanian factor to be a driving force for European integration and a clear Euro-Atlantic orientation.

In pursuing our regional policy, we will continue to rely heavily on our two key EU neighbours, Italy and Greece, as two vital and strategic partners, and strong advocates for our EU agenda and our economic development.

Those in our region who witnessed the former communist rule know only too well that there’s a direct link between democratic open societies and economic prosperity.

It is undeniably true that the Euro-Atlantic agenda has been crucial in advancing such ambitions for the entire region.

This is especially true across those in the frontline of development across Central and South East Europe.

Our duty in Albania and elsewhere in the Balkans for 2017 and beyond would therefore be to accelerate our common action together with the EU and NATO, as well as with other civil society and interest groups in our countries in order to strengthen our democratic credentials.

This means tangible strengthening of the rule of law, tougher fight against endemic corruption and organized crime, solid and independent justice systems, more transparency in the way we govern, and full accountability in public life as a non-negotiable element of our path towards smart and sustainable political, economic and societal development for our future generations.