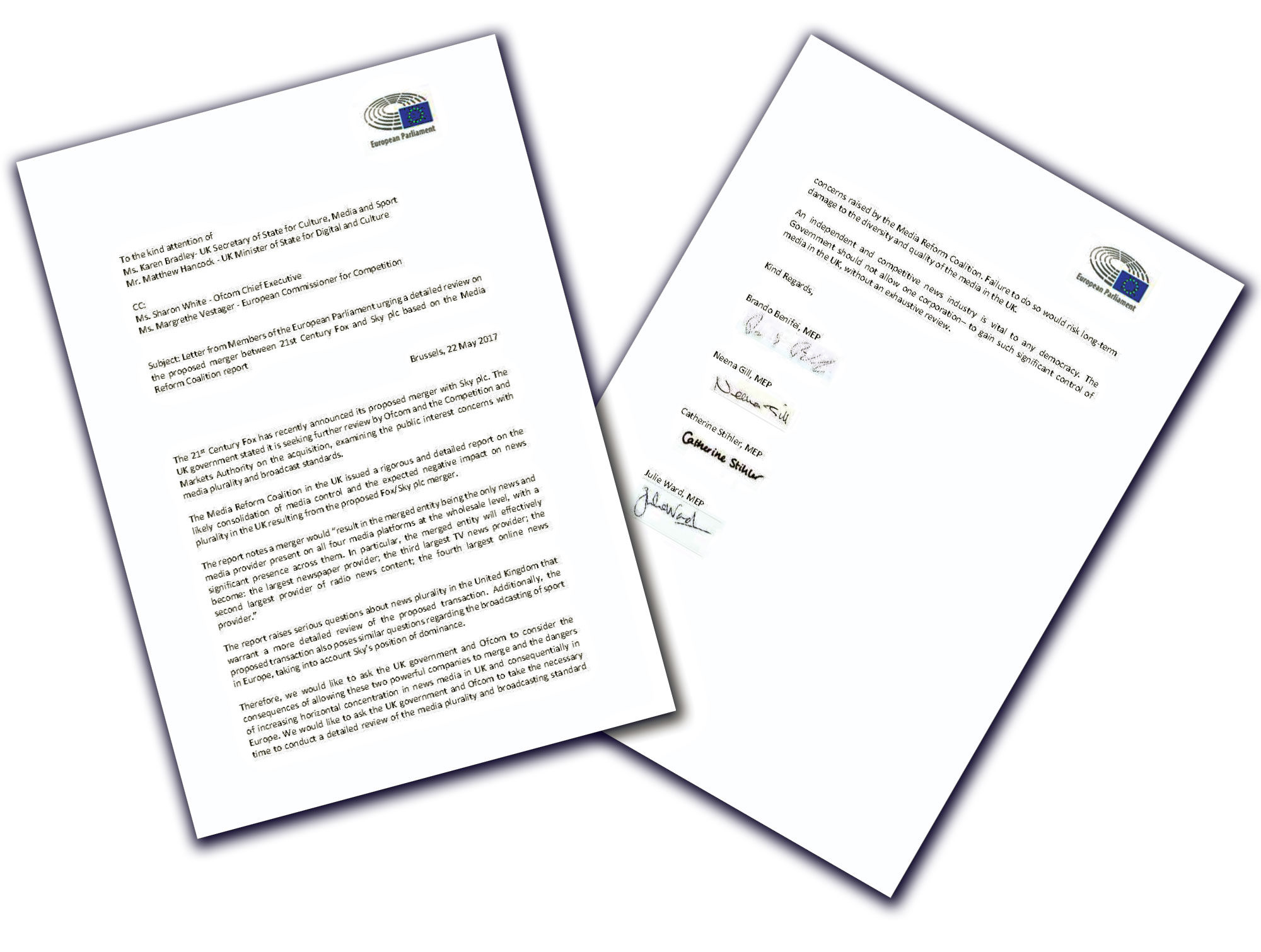 Four members of the European Parliament have written to the UK government urging a detailed review of the proposed merger between 21st Century Fox and Sky plc following critical findings in the latest Media Reform Coalition report. The letter, addressed to UK Secretary of State for Culture, Media and Sport, Karen Bradley, and UK Minister of State for Digital and Culture, Matthew Hancock, follows a report by The Media Reform Coalition in the UK which “expected negative impact on news plurality in the UK resulting from the proposed Fox/Sky plc merger.” The report was submitted to OfCom, the UK media regulator, as evidence for its investigation.

Last month, the UK government announced it will delay the Competition and Markets Authority and Ofcom investigations into the merger because of the proximity of the general election, pushing back the original deadline of May 16 to June 20.

The four signatories of the letter, Members of the European Parliament Brando Benifei, Neena Gill, Catherine Stihler, and Julie Ward, urge the UK government to safeguard “an independent and competitive news industry”, which they insist is “vital to any democracy.” Indeed, the Media Reform Coalition Report submitted to OfCom finds that “the merged entity will effectively become: the largest newspaper provider; the third largest TV news provider; the second largest provider of radio news content; the fourth largest online news provider.”

The letter follows growing concern for the merger. The Financial Times wrote earlier this month that “Fox’s second bid for Sky deserves proper scrutiny,” finding that three issues are of paramount concern: whether the deal would harmfully diminish the plurality of media ownership in the UK, whether it would jeopardise UK broadcasting standards, and whether Sky and its chairman James Murdoch are “fit and proper” holders of a UK broadcast licence.

The letter, also copied to Ofcom Chief Executive, Sharon White, and European Commissioner for Competition, Margrethe Vestager, concludes that The Government should not allow one corporation– to gain such significant control of media in the UK, without an exhaustive review.

Last month, the European Commission competition authorities cleared the merger but said the clearance decision is without prejudice to the UK’s ongoing media plurality review of the proposed transaction.

Fit and proper… for the 19th Century?

But the trouble for the Fox News bid does not end there. The 21st Century Fox’s takeover of Sky should be blocked until allegations of sexual and racial harassment at Fox News have been resolved, according to a lawyer representing alleged victims in the US.

As published in The Guardian, Doug Wigdor – who is representing 21 current and former Fox News employees – said that “it was difficult for Ofcom, to determine whether Rupert Murdoch’s 21st Century Fox was a “fit and proper” owner of Sky without a full set of facts regarding the cases. He also called for 21st Century Fox to lift gagging orders on victims of harassment and discrimination at Fox News who reached a settlement with the company over the last decade.”

Another lawyer, Lisa Bloom, who is representing another three women suing Fox for sexual harassment, believes that that the 21st Century Fox is not fit and proper to expand its interests in the UK, telling The Guardian that “The parent company may be called 21st Century Fox, but they behave more like 19th Century Fox.”